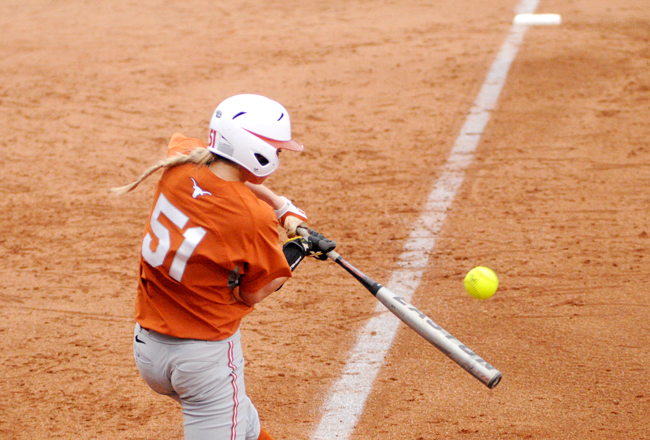 Senior first baseman Lexy Bennett has been a key piece of Texas 23-2 record. She is hitting .471 with a .539 OBP and a perfect fielding percentage.

While they are away from paradise and back on the mainland, the Longhorns are back traveling as they head north to Iowa for their second conference series of the season.

Texas (23-2) faces the Iowa State Cyclones (9-15) in a three game series in Ames. The Longhorns are 164-93 historically in all of their conference play. Against the Cyclones, they have an overall record of 33-1 with a current 13-game win streak.

Iowa State will debut in conference play against Texas in this series. It is coming off a California road trip against Loyola Marymount, St. Mary’s and Santa Clara where they went 2-3. Tori Torrescano, one of the Cyclones’ leaders on the mound, is batting .357 with eight home runs and 25 RBI. She is also 6-9 with a 5.65 ERA in the 74 1/3 innings she has pitched.

Texas just recently moved up in the rankings to No. 5 in the country after their Spring Fling Tournament in the Aloha State. The Longhorns went 4-1, with their only loss being to No. 1 California in a 6-3 decision. In the tournament they outscored their opponents 27-6 and beat another top 25 team in Hawaii (No. 18).

While they are fourth in the nation in batting average and fielding percentage, leading the Big 12 in batting average, the Longhorns are looking for another conference sweep. They recently had a two game series with the Texas Tech Red Raiders in Austin. Texas took the two victories starting out their conference play with a pair of wins.

Senior Lexy Bennett, who was just featured on the Big 12 website and described by her teammates as “the rock of the team” is looking to continue her already record-setting season.

In the Spring Fling tournament in Hawaii she was named to the all-tournament team along with teammates Brejae Washington and Nadia Taylor. Bennett, one of the senior captains, has been a big part of the Longhorns success this season and has already been drafted in the National Pro Fastpitch league.

The contest, which starts this evening with a 4 p.m. first pitch, lasts until Sunday afternoon.

After this road trip they will have one more stop in Houston for a one-game stand with the University of Houston before coming back to Austin. While it may not be spring break anymore, the Longhorns are ready to get back on the field and continue their success as a team.

Printed on Friday, March 23, 2012 as: Horns return from Hawaii, go to Ames to play Iowa State