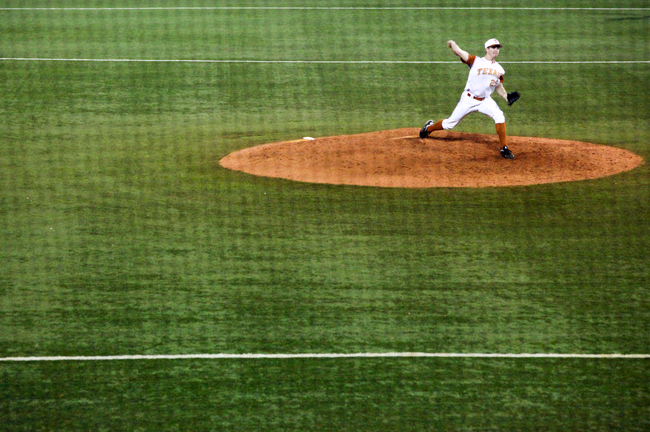 Closer Corey Knebel and the rest of the Longhorns struggled early on in the season but they have won their last six games thanks to improved offense.

Pressure. It’s such a simple thing, but when it builds up it can make or break a team.

The Longhorns (11-8, 3-0 Big 12) experienced this pressure early in the season. They struggled at the plate, and the team’s difficulties there moved into the rest of the roster, as the players aimed to do too much to pick up their teammates slack. This resulted in a terrible 5-8 start that included a three-game sweep by Stanford and losses to historic baseball powers such as UT-Arlington and Loyola Marymount.

“They were trying to get a hit, and you can’t try to get a hit,” said head coach Augie Garrido. “Players do their best when they’re not expected to or don’t have to. If they feel like they have to, they try too hard.”

The offense’s difficulties at the plate carried over to the rest of the team, according to Garrido. Once the offense struggled, the pitchers put more pressure on themselves to be perfect. Their struggles carried over to the defense and ultimately the coaching staff. This process gave the team a negative attitude that only winning could solve.

The turnaround came in Norman when the Longhorns swept the Sooners in three games, breaking out for 25 runs over 27 innings — more than they had scored in the previous six contests combined.

“When you drive into Norman, Okla. and you’re batting .221 as a team, and you drive out and you hit .360 for the weekend you kind of have a new respect for baseball and the unexpected,” Garrido said. “You kind of go, ‘how the hell did that happen?’”

No matter how unexpected the offensive breakout was, it did wonders for the team and has taken the pressure off. Now the Longhorns are looking to place the pressure squarely on their opponents.

This aggressive style of play works well for Texas. The Longhorns have become more aggressive on the field, which has caused havoc for opponents. On Tuesday in a 9-1 win against Stephen F. Austin, the Lumberjacks looked lost defensively when dealing with the Longhorns audacious base running — they committed three errors but it easily could have been more.

The release in pressure is also noticeable in the player’s demeanors. They are looser on the field and at the plate, and look like they have more fun playing the game.

“You can feel it in the clubhouse,” Payton said. “I know I can see it while we’re stretching. Everything is just lose, loud and happy. Everyone is just into the game and ready to get to the field and get things going.”

The Longhorns will look to keep the pressure off this weekend as they travel to Manhattan, Kan. for a three game series with Kansas State.

Printed on Friday, March 23, 2012 as: Win streak has alleviated pressure after slow start