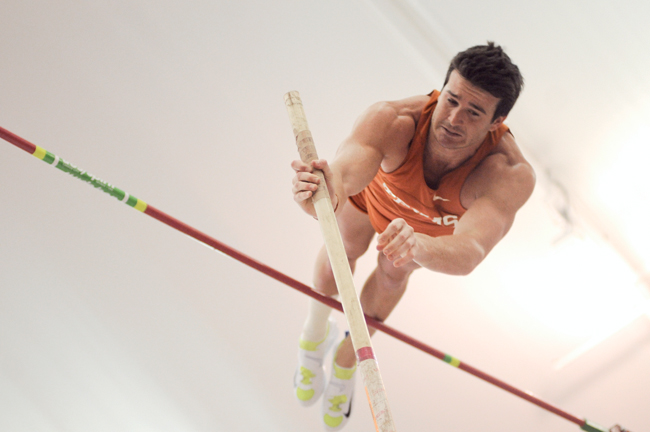 Junior pole vaulter Maston Wallace and the rest of the Longhorns track team head to Los Angeles to face-off with the UCLA Bruins to begin their 2012 outdoor season.

With a successful 2012 indoor season under their belts, members of Texas’ men’s track and field team seek to continue the trend as they dual the UCLA Bruins at Drake Stadium in Los Angeles, Calif. this weekend.

The No. 7 Longhorns will kick off their outdoor season with a select group of athletes. Texas is coming off strong performances in the NCAA Indoor Championships with eight athletes receiving All-American honors.

But they should not take this battle against the Bruins lightly. In last season’s outdoor tri-meet at Mike A. Meyers Stadium in Austin, between Arkansas, Texas and UCLA, the Bruins posted 145 points — just four shy of Texas’ first place finish of 149.

However, a few familiar Texas names associated with greatness hope to repeat and even build upon their success from the previous time they faced blue and gold outdoors: Hayden Baillio and Jacob Thormaehlen claimed first and second in the shot put with throws of 60-3.75 and 60-1 respectively. Triple jumper Mark Jackson finished on top with a leap of 52-6, while Keiron Stewart broke the 15-year-old school record in the 110-meter hurdles with a top 2011 national time of 13.44 to win the event.

Hungry for a win to spark a much-needed streak, UCLA will enter their home dual with full force.