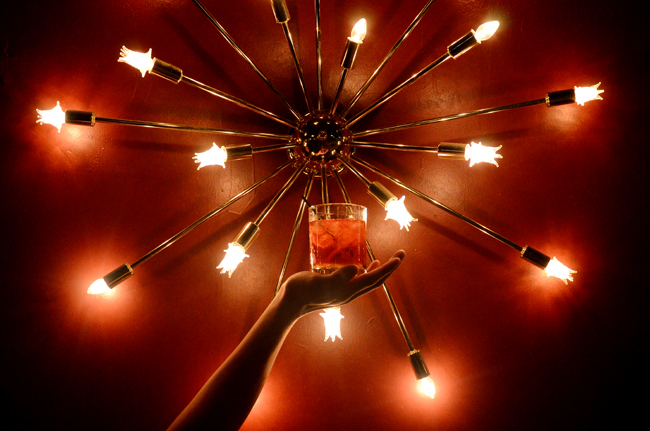 From protagonist Don Draper’s Old Fashioneds to his ex-wife Betty’s Bloody Marys, the retro adulterers on AMC’s “Mad Men” sip on classic cocktails from dusk ‘til dawn. In honor of Sunday’s season five premiere, the Texan met up with staff from Haddington’s American Tavern, The Highball and Easy Tiger to talk timeless drinks and their Mad Men sensibilities.

We’ve included recipes for the classic versions of these retro concoctions, but here are some ideas to update the drinks for your modern palate.

“We try to stay as classic as possible, but we do spin-offs like the Whitfield Porter, which is our version of the Manhattan,” said Haddington’s bartender Bryan McKinney.

The Whitfield Porter is a seasonal drink on the Haddington’s cocktail menu and consists of two parts bourbon for every one part of vermouth and also has different flavored bitters. The bar changes up the conventional cherry garnish and replaces it with a grapefruit peel.

“Classically, unless a drink has juice in it, you don’t shake it,” McKinney said. “You want to stir the drink until your arm is on fire, that way you don’t bruise the bourbon.”

As for the vermouth, the bar has a specific method for maintenance. Since the liquor is a wine-based spirit, keeping the bottle fresh requires proper care.

“It’s like drinking a bottle of wine that’s been open for a year and a half: of course it doesn’t taste good,” McKinney said of vermouth that isn’t well cared for.

“Typically, the classics are a way to cover up the taste of the alcohol,” said Jeff Brennecke, a bartender at The Highball. “People had to make the alcohol during prohibition so they were really not going to wait and taste it.”

That’s why the classic cocktails have simple syrup, different flavors of bitters and mixtures to cover up the strong flavor, Brennecke said.

The Highball does a rendition of Draper’s Old Fashion called the OG. Brennecke said they change up the traditional bourbon with cherry bourbon.

“It’s obvious that the novelty of classic drinks is not wearing off,” Brennecke said. “I think they’re actually making a comeback, and it probably has something to do with ‘Mad Men.’”

Aside from its beer specialties, Easy Tiger prides itself on a scotch and whiskey collection.

Amanda Jackson, restaurant manager at Easy Tiger, said it is typically the knowledgeable customer who orders these liquors. “They’re experienced males who are a part of the downtown office working group,” Jackson said.

For a more Betty Draper-themed drink, however, Easy Tiger has recently included a heartier version of a traditional Bloody Mary on their menu.

“We have a house-made Bloody Mary mix made from in-house vegetables,” Jackson said. “We make it with Monopolowa and serve it with a big stick of beef jerky.”

As a garnish, the Bloody Mary is accompanied with a bamboo stick that has pickled vegetables. These range from Brussels sprouts to cauliflower and carrots.