Vince Young needs a job, where could he land an NFL free agency? 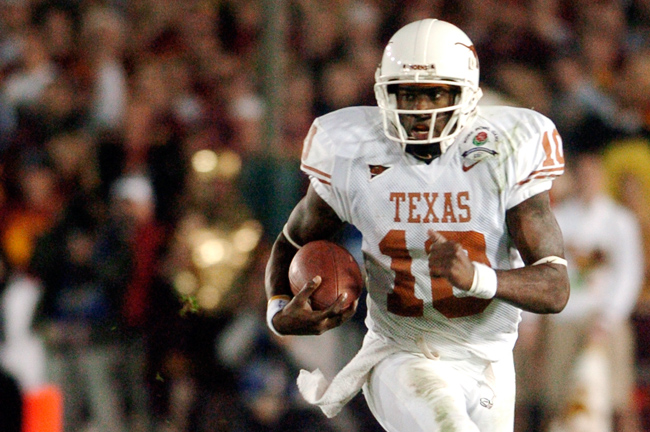 Vince Young runs downfield in the 2006 BCS National Championship game. Young, a heralded college quarterback, is stuck searching for a team in the NFL. (File photo)

Young was the third overall pick in the 2006 NFL Draft by the Tennessee Titans, NFL Offensive Rookie of the Year and is a two-time Pro Bowler.

But now this Texas legend is looking for a job as an unrestricted free agent. His stock has seemed to gradually drop since his 2008 season with the Titans.

Can we still blame the “Madden curse” for his lack of a team? His off-the-field issues are likely a concern for potential coaches. Let’s face it, there are a lot of solid backup quarterbacks without that.

Saying that the past week in the NFL has been tumultuous is an understatement. Peyton Manning’s arrival in Denver and Tim Tebow’s trade to the Jets could provide an opportunity for Young to go to the Broncos.

According to reports, the Broncos are looking at Caleb Hanie as a potential backup. Hanie was the backup quarterback for the Chicago Bears for the past three seasons and led the team to four embarrassing losses last season.

Although Young hasn’t lived up to expectations in the pros, the Broncos could use his expertise. He obviously hasn’t been the star that was expected, but he can still play. Hanie had his opportunity last season for the Bears and did not perform.

Unfortunately for Young, a lot of other quarterbacks are in the job hunt. He isn’t the hot commodity he was when he left Texas.

In a tweet on March 19, Young hinted that San Francisco was a possibility for him. But now that Alex Smith has re-signed with the team, Young’s chances of joining San Francisco have decreased drastically.

In that tweet, Young also mentioned the Dolphins. Lacking a solid quarterback, the Miami Dolphins could be a potential team for Young. Their current starter is Matt Moore and the backup is veteran David Garrard, who has been playing in the NFL for 10 years. Garrard didn’t play at all last season and still has the hope of becoming the team’s starting quarterback. But Young’s experience is stronger than his, so the Dolphins would definitely be a good opportunity for him.

These three teams could find a place for Young. But spots for backup quarterbacks are starting to close and Young still hasn’t found a place, so his unemployment will continue.