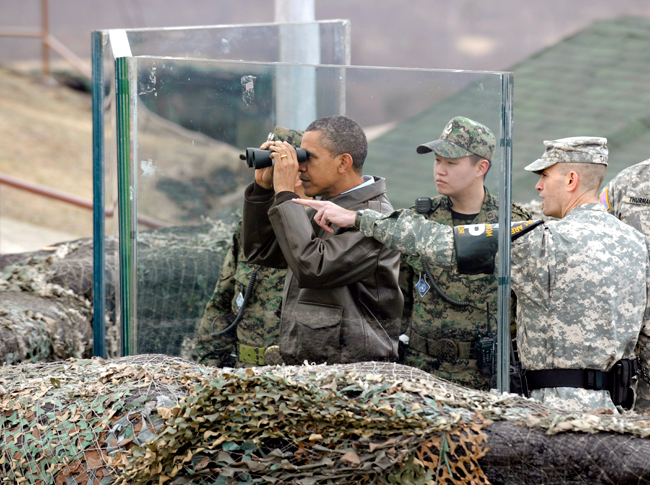 SEOUL, South Korea — Trying to muscle North Korea toward peace over provocation, President Barack Obama is broadening his squeeze play from the heart of this tensely divided peninsula, pressuring China to show more influence and warning North Korea that it is headed toward a crippling “dead end” of isolation.

From this capital teeming with pride, Obama sought for a second day Monday to contrast the success of the South to the impoverished North, whose nuclear and missile tests have kept its neighbor on edge and itself on the wrong side of the world community. Already, he said, looking into the North from near the border was like witnessing a “time warp” of despair.

In a speech at Hankuk University, one of Seoul’s top-ranked schools, Obama will campaign against the spread of nuclear material and weaponry with North Korea’s shadow figuring large. The North plans to launch a satellite with a long-range rocket next month against fierce objections from world powers, as the same technology could be used to fire a missile.

Obama will also try to build diplomatic force by turning to China, North Korea’s main ally, when he meets with Chinese President Hu Jintao. That conversation is among a flurry of engagements for Obama, including a final meeting with departing Russian President Dmitry Medvedev, on the sidelines of a major Nuclear Security Summit.

“It’s not clear exactly who’s calling the shots and what their long-term objectives are,” Obama said. “But regardless of the North Korean leadership, what is clear is that they have not yet made that strategic pivot where they say to themselves, ‘What we’re doing isn’t working. It’s leading our country and our people down a dead end.’”

Obama then set some blunt expectations for China, questioning how much it was helping to ease tensions with North Korea by turning a “blind eye to
deliberate provocations.”

“That’s obviously not working,” Obama said. He said he did not doubt China shares the goal of a nuclear-weapons-free North Korea, but that it had to act on that.

The president’s three-day trip here amounts to a reminder of the international struggles in his lap in the midst of a re-election year driven more by economic woes. He came to solidify pressure on North Korea, seek help with crises in Syria and Iran and advance a global effort he spearheaded to keep nuclear material from getting into terrorists’ hands.

Obama wore a tired look after a 17-hour flight from Washington, a helicopter ride to the border zone, two sets of diplomatic talks, the news conference and an official dinner. But he succeeded in showing solidarity with his diplomatic friend, South Korean President Lee Myung-bak, and in cementing a lasting presidential image from inside no-man’s land.

The Demilitarized Zone is a Cold War anachronism, a legacy of the uncertain armistice that ended the Korean War nearly 60 years ago. Hundreds of thousands of troops stand ready on both sides of the border zone, which is littered with land mines and encased in razor wire.

From a lookout point with binoculars is hand, Obama peered North, then South, within a football-field’s length of the demarcation line.

He also shook hands and spoke briefly in the dining hall at a U.S. military camp just outside the 2.5-mile-zone, saying the troops were working at “freedom’s frontier.”

The United States has about 28,500 troops in South Korea, a deterrent force and a symbol of the military might Obama wants to keep in Asia.

The planned rocket launch by North Korea is yet another setback for the U.S. in years of on-again, off-again attempts to launch real negotiations.

North Korea walked away from international disarmament talks in 2009. Years of fitful negotiations had succeeded in ending part of North Korea’s nuclear program but failed in stopping it from building and testing nuclear devices and long-range missiles that might be able to carry bombs.

Obama said the launch would jeopardize a new deal for the U.S. to resume food aid to North Korea, and the world community would likely respond with another round of sanctions.

The big consequence for North Korea, he said, would be one big blown opportunity.

“If a country can’t feed its people effectively, if it can’t make anything of any use to anybody, if it has no exports other than weapons, and even those aren’t ones that in any way would be considered state-of-the-art … then you’d think you’d want to try something different.”

For his part, Lee said: “There is no difference of opinion between the U.S. and South Korea. We’ll remain very calm and rational and we will be wise in dealing with the North Koreans if in fact they do go ahead with their announcement.”

Obama has called nuclear terrorism the gravest threat the United States and the world may face. North Korea is a prime suspect in the proliferation of some nuclear know-how, along with missiles that could be used to deliver weapons of mass destruction.