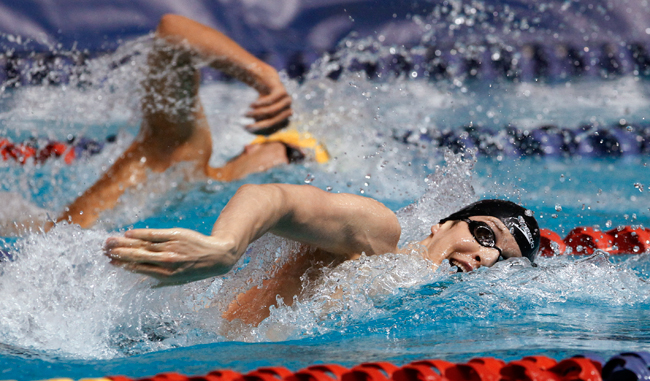 Senior Neil Caskey and Californias Benjamin Hinshaw race within inches of each other during the 800 yard freestyle relay on Friday. At the meet, Caskey broke a school record in the 200 butterfly with a time o

The No. 2 Texas Longhorns men’s swimming and diving team fell short of winning their 11th national title over the weekend, coming in second place to No. 6 California.

Following a strong performance on Thursday in which the Texas men finished third in points earned, Friday saw the Longhorns get off to a great start, as 10 individuals and one relay squad posted preliminary times strong enough to qualify for the finals later in the day. Texas pushed into second place by the end of day two, but couldn’t string together enough close wins to edge the Bears by day three.

Texas would add two more titles to their overall Championship haul on Friday, raising the total to four through the first two days of the event. The first came from junior Dax Hill, who competed in the 200-yard freestyle.

Hill’s performance was an impressive one. The Round Rock native posted the fastest time of the day in preliminaries. Entering the final heat, Hill was looking to one-up his performance in the event from the 2011 NCAA championship where he finished in second place.

Hill got off to a strong start in the race, but quickly fell behind USC’s Dimitri Colupaev. With 100 yards to go, Hill knew it was his moment to make a move.

“[Colupaev] went out fast tonight and in the last 100 I saw I was catching up to him. I knew he was going to be hurting so I turned it up a notch. When I flipped on the last turn I knew my legs were a little fresher and I had it,” Hill said.

Hill finished the event in a time of 1:32.51, good for fifth best in school history.

“It feels amazing and it is almost a relief,” Hill said. “The team needed it and I was glad I was able to come through for the guys.”

And Hill’s contributions to the team were just getting started. In addition to his individual event, Hill joined freshman Clay Youngquist, freshman Kip Darmody and senior Neil Caskey in the 800-yard freestyle relay. Hill charged off the blocks in the first leg of the race and put the squad among the front in the event, recording a split time of 1:33.80. Youngquist followed this with an even stronger performance and put the Horns in the front of the field.

Despite this early success, the Horns squad faltered a bit in the middle of the race as Darmody was overtaken by California’s Will Hamilton in the third leg. The burden of the victory fell on the shoulders of Caskey, who contributed to a Longhorn victory in the event back in 2010. This time around, Caskey came up big for the Horns, posting a personal best split-time of 1:33.26, fast enough to secure another national championship for the relay team.

The Longhorns’ point total increased from 128.5 to 343.5 on Friday, moving the squad into second place. Heading into the final day of the championships, the Longhorns had closed the gap on first place California, just 34 points away from the lead.

Saturday proved to be the decisive day for the team. Senior Jimmy Feigen anchored the 400-yard relay squad. He followed Hill, Youngquist and junior Austin Surhoff. Feigen blazed through his closing leg of the event, erasing a deficit of almost a full second and overtaking the field en route to delivering another national title for the Horns.

Feigen’s night was just getting started. The 17-time All-American returned to the pool in the 100-yard free. When the lights came on, Feigen didn’t let the effects of a grueling championship schedule stand in the way of his second individual title of the weekend.

“I was weary going into tonight and wanted to get off the blocks as fast as I could,” Feigen said. “When I saw that I was ahead I was a little shocked. It fueled my energy level and I pulled out the win.”

At the end of the day, the Horns simply couldn’t find enough victories to overtake the commanding California lead. The Longhorns fell to the Golden Bears 491 to 535.5. Coach Eddie Reese held on to a high expectation for his team to earn another national championship, though claimed full responsibility for the team’s shortcoming.

“You would think second would be good enough, but it is not,” Reese said. “We came in having a shot and Cal stepped up every time and had a great race. We let down a little bit this morning and they got up on us. We weren’t as good as we needed to be and that is my fault.”

Overall, 14 swimmers earned All-American or honorable mention statuses. The five individual titles won over the weekend are the second highest haul for the team since the seven earned in 2004. With this year’s second place finish, Texas has continued an incredible reign as one of the top swimming programs in the country, extending a mark of top-five finishes in 32 out of the past 33 years.