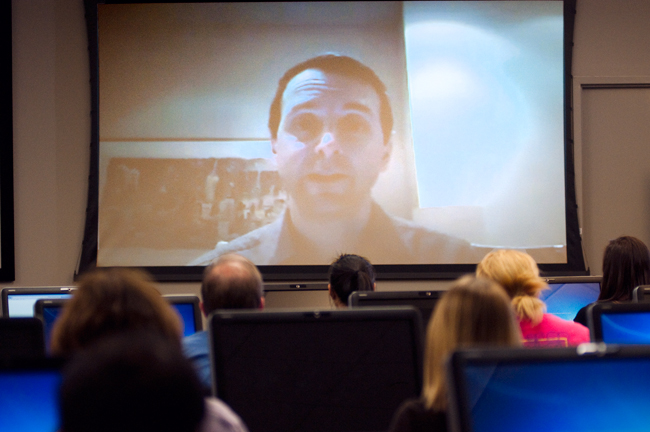 A former insider trader who is soon facing life behind bars advised students to steer clear of illegal activities that may cause them to end up in his position.

The Texas Undergraduate Investment Team hosted a talk featuring Garrett Bauer, a New York stock trader who committed one of the largest insider trading schemes that earned him around $37 million and is now facing an up to 11-year sentence in federal prison. Bauer spoke to students Tuesday night via video chat about the crimes he committed and the consequences he faces now because of his illegal activities.

Finance and business honors senior Anuj Khandelwal, co-head of TUIT, said insider trading is a white-collar crime with no real harm to one person, but it can entice many professionals in the finance world.

“As students and soon-to-be professionals, we make decisions everyday — some ethical and some not,” Khandelwal said. “However, we want to educate students and ensure that they perform ethically in the wake of a tough decision.”

Bauer’s insider trading scandal began when his former partner in insider trading turned in Bauer and the lawyer involved with their insider-trading scheme to the Federal Bureau of Investigation.

“Many years ago, the two of them found out a possible merger and were looking for a trader to trade a stock for them, and that’s when they called me,” Bauer said. “I’m considered a ‘tippee’ because I received illegal information from one of my closest friends of 20 years who got his information from a lawyer.”

Bauer said he knew what he was doing was wrong but thought he would not be caught because insider trading meant only using specific pieces of information, as opposed to doing his own research.

Bauer was charged with insider trading in April 2011 and pled guilty in December 2011. His prison sentence is scheduled to begin May 1.

Sabine Wimmer, administrative associate for the Center for International Business Education and Research, said Bauer explained insider trading in a way that students can
understand it.

“[Bauer] felt in his mind that it wasn’t insider trading because he did all his own research, but he did a good job in telling students what it is,” Wimmer said. “You can learn all you want but it’s a different lesson to see what somebody’s losing because of insider trading.”