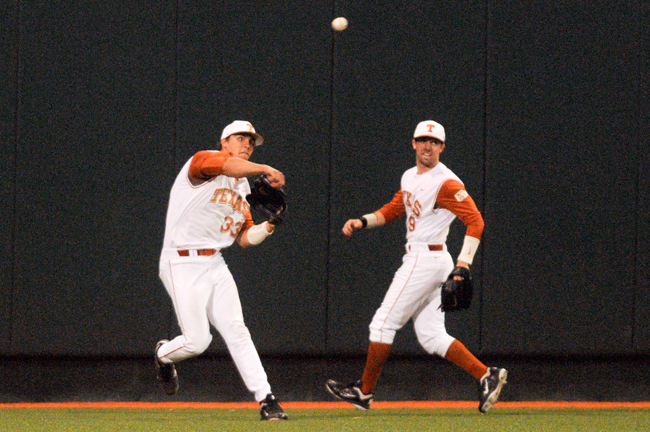 Jonathan Walsh, 33, tries to throw a runner out in a recent game for Texas. Walsh carried UT offensively last weekend against Kansas State.

Jonathan Walsh was born to be a baseball player.

At 6-3, 220 pounds, Walsh is the perfect blend of power and speed that can intimidate pitchers in the batter’s box and make incredible plays in the outfield.

On top of his major league ready stature, he comes from an athletic background that almost ensured that he was destined to shine on the diamond. His grandfather was drafted into the Brooklyn Dodgers organization, his father played college football at Nebraska and all three of his brothers played college baseball ­— including his twin brother, who plays at UT-Arlington.

“Growing up I was never lonely, I always had them to go play with,” Walsh said. “Being the younger one, I was lucky that they would let me tag along with them. They were rough on me, but it’s made me a lot better of a player and made me tougher.”

Those lessons learned in backyard contests and brawls have carried over to Disch-Falk Field and the Texas’ lineup. Walsh moved into the cleanup spot in the order early on in the season, and has excelled hitting at a team leading .360 clip ­­­— after a 9-15 performance in last weekend’s series against Kansas State.

“I’m seeing the ball real well right now; it’s like a beach ball to me,” Walsh said. “I feel really confident stepping into the batter’s box.”

Walsh, who hit near the bottom of the Longhorn order last year in his sophomore season, has embraced his new role and has enjoyed the RBI opportunities and responsibilities that come with it. He also said that hitting behind a player the quality of Erich Weiss never hurts.

However, the rare thing about Walsh is that he has stepped up when moved into the cleanup role, a position in which most players usually struggle, because they press and try to play outside of themselves to aid the team.

“Some people get intimidated by it and think it’s too much responsibility, but he liked it,” said head coach Augie Garrido. “He’s got a lot of leadership skills and a lot of baseball savvy, he’s probably one of the most instinctive and smart players here. He recognizes the details of the game both offensively and defensively.”

Things haven’t always been that easy for Walsh. Last season he had his difficulties at the plate hitting only .254. That number isn’t bad, but when you consider the potential he has, those numbers are pedestrian compared to his capabilities.

His coaches have noticed a real difference in him this season.

“He is more mature and confident in his ability,” said associate head coach Tommy Harmon. “We’ve always known he’s had the ability, but he’s had trouble settling down and staying hooked up. He’d have flashes of brilliance and then wouldn’t hit for two weeks, and then go through another stretch. He was real streaky. But now that he’s gotten older, he’s able to calm himself down and stay more consistent.”

The other thing that has played into Walsh’s transformation is a technical adjustment in the batter’s box. Last season, he had an uppercut swing that caused him to either pull balls foul or hit pop ups, but this summer he worked to gets his hands higher in his forward swing putting more backspin on the ball, which encourages line drives.

“Last year my hands were down low, under my shoulder, but with my hands up higher it helps me swing down on the ball and get some backspin, and puts me into a better rhythm at the plate,” Walsh said.

With the way Walsh is playing this season and his family history it will come as no surprise that he was drafted out of high school, but instead of signing he made the decision to come to the 40 Acres and compete for a championship. But now, his time in Austin has been more defined by the experiences and fun he’s had with his teammates.

“I wouldn’t change the three years I’ve had here, not just the baseball but the people I’ve met and the fun I’ve had. The people and memories I made here will never leave,” Walsh said. “One of my major goals is to play pro ball, but I know that will be there and I can start that chapter in my life when I’m done here.”