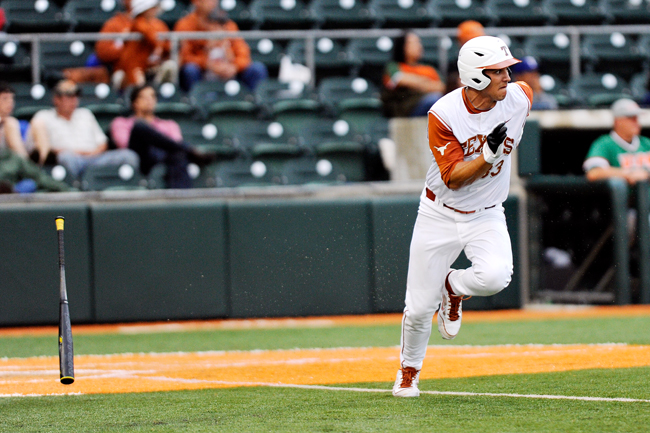 Jonathan Walsh's pro career is off and running.

After Texas jumped out to a four-run, first-inning lead, it looked like the Longhorns would win easily. They won, but it wasn’t easy. Had it not been for juniors Hoby Milner and Jonathan Walsh, they might not have won at all.

Texas held a 4-0 advantage after the first frame but saw that lead erased by the end of the third inning, when freshman pitcher Ricky Jacquez surrendered four hits and four runs. Just like that, the Longhorns trailed UT-Pan American, 5-4. But thanks to Milner, who tossed six scoreless innings, Texas hung in the game long enough for junior designated hitter Landon Steinhagen to score game-tying and go-ahead runs in the fourth and sixth innings.

Milner picked up the win, improving to 5-3 on the year, as the Longhorns beat the Broncs, 9-5, Wednesday night at UFCU Disch-Falk Field as they have won nine of their last 10 games.

“It was a masterful job. Hats off to Hoby,” said Texas head coach Augie Garrido. “He was really effective against good hitters. He had a great presence on the mound, good command.”

Walsh hit a two-run triple to deep right-center field in the first inning and scored on a wild pitch before an RBI double to left-center by sophomore first baseman Alex Silver. In Walsh’s last seven games — each of which he has registered multiple hits — he is hitting .529 while scoring nine times and driving 13 runs. Walsh, a junior left fielder, homered for the first time this season in the eighth inning and racked up 5 RBIs.

“He’s just having fun playing ball and he’s got a lot of confidence going for him right now,” Garrido said. “He told someone that it made him feel good that I put him in the four-hole and I didn’t do it because of that. I did it because nobody was doing anything.”

But UT-Pan American did not go down without a fight. Sophomore right fielder Mark Payton threw out a Broncs runner at the plate after Silver made his first error of the season but could not keep freshman Dillon Peters from giving up his first run of the game on an RBI single by Adrian De La Rosa. Then, Jacquez began the third inning by allowing a pair of singles before Vincent Mejia blasted a game-tying home run over the left field wall and Angel Ibanez tripled and scored to give UT-Pan American a 5-4 lead.

In came Milner, who saw action in each of the Longhorns’ three games over the weekend against Kansas State, even getting a win in the series finale last Sunday. But Milner appeared well-rested, throwing 101 pitches and facing the minimum 18 batters over his six innings, picking off two of the four batters he allowed to reach base.

“Having two days off is enough for me,” Milner said. “We had four or five pitchers on the list and we were going to go one or two innings each, but I kind of got on a roll so they stuck with me.”

Had the Longhorns been set to face a Big 12 opponent this weekend, Garrido said, Milner would not have thrown more than two or three innings. But with Pac-12 foe Cal next on Texas’ schedule, the junior hurler was given the green light to finish the game.

“You saw a presence on the mound that he has in him that he’s had all along,” said sophomore catcher Jacob Felts. “He pounded the zone and worked ahead. All of his pitches were effective and he got guys out with every pitch.”

If two days of rest are indeed enough for Milner to get back on the mound, he could be throwing again as early as Saturday afternoon against the Golden Bears. But Garrido also said that there’s a chance he might not pitch at all this weekend.