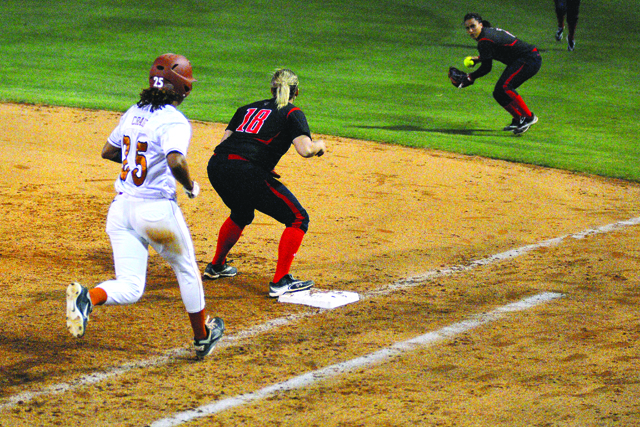 Senior outfielder Courtney Craig (25) attempts to beat out a throw from a Texas Tech infielder in a recent game. With their win over Houston, the Longhorns have now won five games in a row and are 27-2 overall.

Home runs were the norm as No. 8 Texas easily defeated the University of Houston Cougars 15-4 in a shortened five inning game on Wednesday evening. The contest was a part of the Longhorns’ annual breast cancer awareness game, Striking Out Breast Cancer.

“The bats were good again right out of the gate,” said Texas head coach Connie Clark. “Great focus from pitch-to-pitch and great at-bats.”

Inspired by last week’s grand slam from junior pitcher Kim Bruins, two Longhorns turned right around Wednesday and produced yet another pair grand slams. Sophomore catcher Mandy Ogle and sophomore infielder Karina Scott each recorded their first career slams in the blowout win. Scott’s came in the top of the first inning while Ogle’s came in the top of the fifth inning.

The four home run game is a season high for the Longhorns. In the past five games alone, the Longhorns have notched 14 total home runs, bringing the season total to 36.

Senior Courtney Craig also turned in a career best performance with four singles as she went 4-for-4 at the plate. Freshman right-hander Gabby Smith started the night out for the Longhorns in the circle. Smith allowed a total of four runs across, with three coming off a home run in the bottom of the first inning. Smith finished the night having allowed three hits in three innings before junior All-American Blaire Luna came in as relief to start the bottom of the fourth inning.

Luna pitched two scoreless innings with only one hit, three strike outs and zero walks. Smith came away with the win for the evening.

The Longhorns will play their next seven games at home starting with a weekend series against New Mexico.