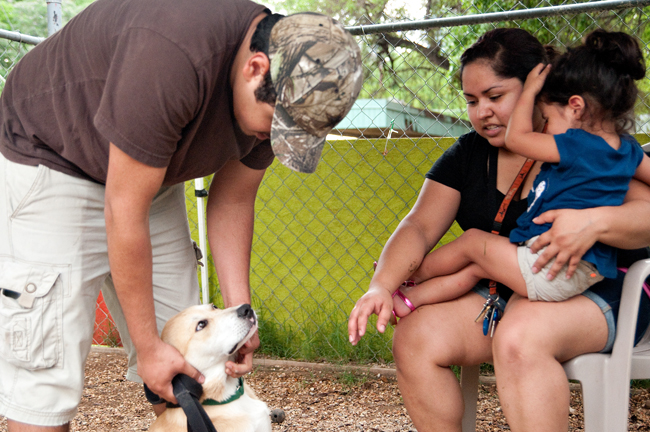 Ernest, Gabby, and their daughter Emma Seldana, 2, visit with a dog at the Town Lake Animal Shelter Wednesday. The shelter is temporarily waiving adoption fees to reduce overcrowding.

Fraga said adoption fees, which usually range from $75 to $150, will be waived until the kennels are cleared to prevent euthanasia of the dogs. All the adopted dogs will be spayed or neutered, vaccinated and will go home with a collar, tag and microchip, Fraga said.

“They are all at risk of euthanasia if not adopted,” Fraga said. “Particularly the older and long-term dogs. We do everything in our power to prevent that and really don’t want it. We get the word out and try to get people to meet the dogs and know their risk.”

Town Lake Animal Center spokeswoman Melissa Miller said adopting a pet from the shelter is rewarding for both the dog and owner.

“By adopting a pet, you’re not only bringing home a new family member, you’re saving a life,” Miller said. “You will receive unconditional love from a furry friend and are saving the life of an animal who might have otherwise been killed at a shelter.”

The average number of dogs at Town Lake Animal Center is 60, and the center is now housing 90 dogs, Fraga said.

Fraga said the recent population increase of stray dogs is due to the warm time of year and recent storm, which frightened many animals and caused them to run away.

“Stray animals are just an ongoing issue,” Fraga said. “The city faces it every day. Especially now because it’s the beginning of spring. Many dogs and cats are entering mating season so they will get loose, and if they are not spayed or neutered they will reproduce and those babies will have nowhere to go.”

Fraga said the support of volunteers, foster families and people willing to adopt has helped Austin maintain its status as a “no-kill city,” meaning more than 90 percent of animals in shelters are adopted to homes and not euthanized.

“Adoptions have been increasing which is a great thing for the city,” Fraga said. “People are very supportive. We have increasing numbers of volunteers and those willing to foster.”

“Most homeless pets have absolutely nothing wrong with them and are exactly the same as non-homeless pets,” Meyer said. “Adopting an older dog can have huge benefits, since you don’t have to go through the puppy stages and house-training and deal with the crazy puppy energy.”