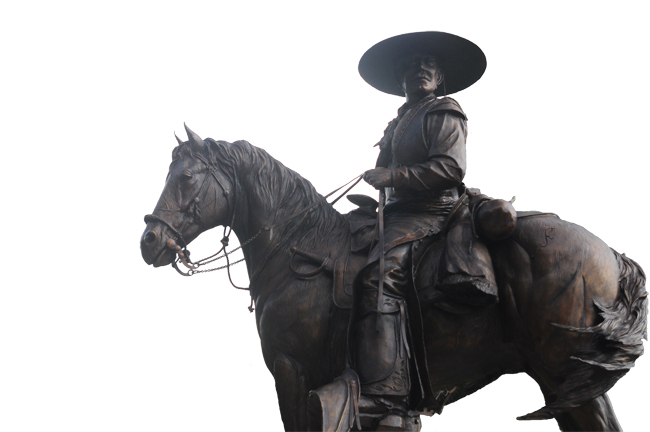 A monument honoring Tejanos and their role in the history of the development of Texas was unveiled at the capitol Thursday afternoon. A parade will be held Saturday morning to celebrate the monument.

Twelve years of work by Hispanic education and business leaders came to fruition Thursday with the unveiling of a new monument at the Texas Capitol.

The monument honors Tejanos and their role in the history of the development of Texas. The life-sized bronze statues built over slabs of granite showcase 11 members of the Tejano community from throughout Texas history. The monument is part of an education reform to Texas public schools that is beginning with the Austin Independent School District. History professor Emilio Zamora collaborated with Cynthia Salinas, associate professor in the department of curriculum and instruction, and Maria Franquiz, professor in the department of curriculum and instruction, to develop the new curriculum for AISD. AISD will soon be implementing more lessons about Tejano history in Texas into their curriculum and will serve as a model for districts throughout the state, said Celeste Mendoza, associate director for development in the Teresa Lozano Long Institute of Latin American Studies.

“When I went to grade school in Texas, I hoped to learn about my Hispanic heritage,” she said. “I waited all year in seventh grade Texas history, only to get to page 375 in our Texas history book and see one paragraph about the Alamo. I felt cheated.”

The unveiling of this statue and the coinciding education reform is a huge step for our state, Mendoza said.

“The significance is that Hispanic children can feel proud of their heritage and hold their heads high, beaming with pride,” he said. “Prior to this monument, art in and outside the Capitol was always a put-down for Hispanics. A small painting of a ‘Mexican hut,’ photos of laborer Hispanics and Anglo supervisors, engineers and architects, Santa Anna on his knees with a sword to his throat.”

Among attendees at the unveiling was Gov. Rick Perry, who spoke at the event about the overall impact of the unveiling.

“This important monument reflects a larger truth about the origins of Texas, about the contributions of so many Hispanic citizens to the creation of the state we love and the lives we share,” Perry said in a press release. “These contributions are ongoing with Latinos providing political, business and spiritual leadership in communities throughout Texas. The future of our state is tied directly to the future of our Hispanic population, and I believe we have a glorious future ahead of us.”

A Tejano monument conference will be held Friday, followed by a parade along Congress Avenue Saturday morning to celebrate the monument.

Linzy Beltran, journalism and Hispanic studies senior, said she would be attending the events because of the significance of the monument to the Austin community.

“I’m proud for the Latino community,” she said. “I guess now is the time where race and ethnicity are becoming less of an issue and the untold histories are coming out.”