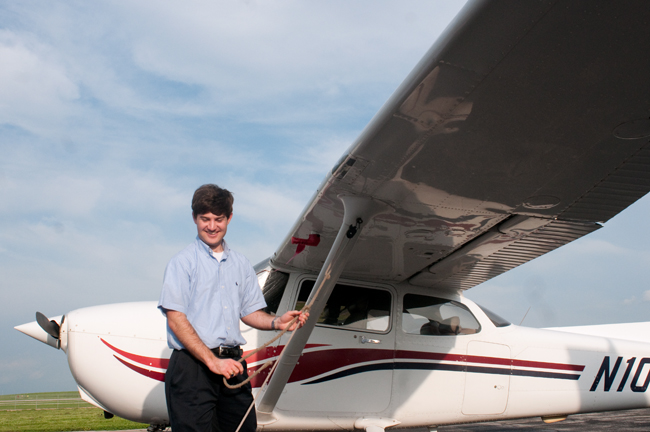 While looking at both the dashboard of controllers and the horizon ahead, finance junior and student pilot Alex Madison demonstrated decisive judgment and confidence beyond his flying experience as the Austin-Bergstrom International Airport air traffic control tower cleared him for takeoff.

“Right here is what I live for; it’s the best part about the flight. You’ll see,” Madison, president of the University Flying Club, said as he prepared his plane for takeoff. “It’s pretty bad ass, right?”

Since he was three years old, Madison has had a genuine passion for airplanes, something he credits to his father’s busy travel schedule. However, it wasn’t until March 20 that Madison received his private pilot license, allowing him to fly without an instructor present for the first time.

“I know how to take care of a plane better than a car,” Madison said. “I can fuel, tow and take baggage off of a plane, but I don’t even know how to change the oil in my own car.”

The University Flying Club is open to anyone with an interest in aviation, not simply those interested in obtaining their piloting license. Madison insists members simply must have the desire to travel to fun places and want to be in a social club.

“You don’t need to be a pilot,” Madison said. “It’s not all about learning to fly. I think people haven’t flocked to it as much as I thought because they have all of these misconceptions that they have to know how to fly planes.”

A student organization that first registered in 1973, but which traces its origins to the Longhorn Flying Club started by UT students in 1956, laid the path for the current University Flying Club.

“Even if you aren’t a pilot, it’s a good way to gain exposure in the aviation field,” said Nicole Curington, radio-televison-film junior and secretary of the club. “I don’t have my private pilot license yet, but I would like to invest the time and money into it, so that hopefully it will happen during my college career.”

Those that don’t have their licenses are encouraged to still attend club flyouts, quick airplane “road trips” consisting of two to five planes, that take place a couple of times each semester. Members have recently taken these trips to Gulf Coast beaches, campouts in state parks and BBQ runs.

Flyouts are taken in smaller planes, and members commonly use the four-seater single-engine Cessna 172.

“For members, flyouts give them the chance to interact with other members in aviation,” said Michael Ways, undeclared business sophomore and vice president of the club. “They showcase the ease of flying. You can leave and come back when you want and it’s so much faster than driving.”

Ways has been an aviation enthusiast for as long as he can remember. Initially, this interest came from his father’s career as a commercial pilot and his flight attendant mother, but has since become his own passion.

As a certified flight instructor, Ways hopes to one day be a commercial pilot in addition to holding his own private pilot license.

“A lot of people think it’s hard to be a pilot, but it’s not,” Ways said. “Yes, it takes money and time, but it’s attainable by anyone. You just have to start with that desire.”

As someone who appreciates the flying aspect even more so than traveling, Ways attests that flying is much safer than the public perceives. He says it is a misconception that smaller planes are dangerous.

“You know when you go scuba diving and they make you sign those waivers that if you die it’s not their fault?” Ways said in a comparison to flying small private planes. “We want to eliminate that sense of fear.”

Madison says it takes good judgment to be a pilot above all else. He said most accidents occur when the pilot is exhibiting poor judgment.

“If you’re going to be a pilot, it’s not just about the technical stuff; it’s having the discipline and not panicking,” Madison said. “You have control of other people’s lives up there.”

Although it’s a goal of every club member to come away with a private pilot license, the officers of the club encourage students to find solace in flight and the benefits that come with having friends with a license.

“[The club] gives members the opportunity to experience aviation. Every pilot once started out in a Cessna 172,” Ways said. “Sometimes people have the wrong impression; they think it’s a bunch of rich people flying out in their little planes, but this opens people’s eyes to how aviation really works.”