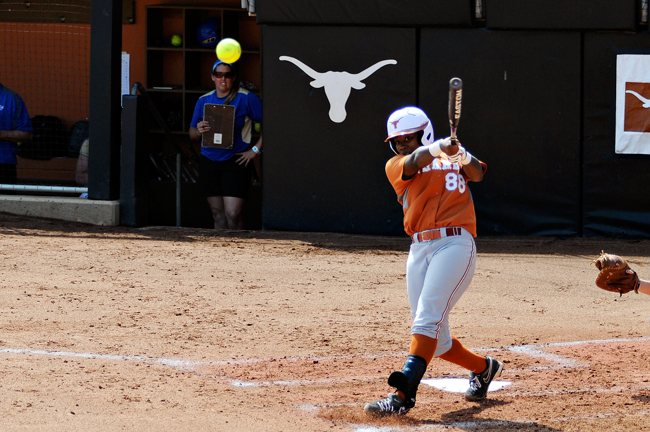 Nadia Taylor knocks a ball into left field. She tied an NCAA record with three doubles.

The No. 6 Longhorns shutout the Lobos, 5-0, Sunday afternoon to finish a four-game weekend. Texas is now 31-2 on the season and 6-0 in Big 12 Conference play.

“Today was very similar to what we have seen all week with the other four non-conference matchups. It was nice for us to be challenged this week,” said Texas head coach Connie Clark. “We knew with New Mexico and Tulsa coming in this weekend they are two very solid non-conference opponents, and it was nice to plug them in.”

On Friday, the Longhorns defeated the Lobos, 2-1, in nine innings. Saturday featured a 9-1 win against the Tulsa Golden Hurricanes followed by a 7-3 win against the Lobos in a double header. Sunday’s shutout win sealed the deal.

“They were scrappy, they swing the bat extremely well so our pitchers were challenged,” Clark said. “To put up a shutout against them is pretty impressive. On the flip side, offensively we just kept making adjustments throughout.”

Bruins registered a walk-off RBI single in the bottom of the ninth inning to defeat the Lobos. In the circle, sophomore Rachel Fox had a career best 13 strikeouts for the Longhorns as she improved to 9-0 on the season.

The Longhorns got off to a slow start during both games of Saturday’s double header. However, powerful sixth inning surges in each of the games by the Texas offense ensured they remained undefeated for the weekend.

In the game against Tulsa on Saturday morning, the Longhorns, already up by two, scored six runs to bring the score to 9-1. The six-run effort ended the game on a run rule.

Against New Mexico on Saturday, the Longhorns were down 3-2 going into the bottom of the sixth, but a five run performance sealed the 7-3 victory. Junior outfielder Taylor Hoagland scored the final run in the sixth. Sophomore Brejae Washington went 2-for-3 with two RBI and Bruins was 2-for-2 at the plate.

Junior All-American Blaire Luna led the Longhorns in the circle on Sunday afternoon to finish the weekend. Luna gave up only two hits while registering 13 strikeouts. She has allowed only one earned run at home in more than 55 innings. The shutout is Texas’s 14th of the season.

“The pace was good. We had to work through some things in today’s game and against Tulsa. As a team, we did really well,” Luna said. “Our first goal is to try to win the Big 12 title. I think as long as we stay progressively consistent with hitting and pitching, we should be just fine.”