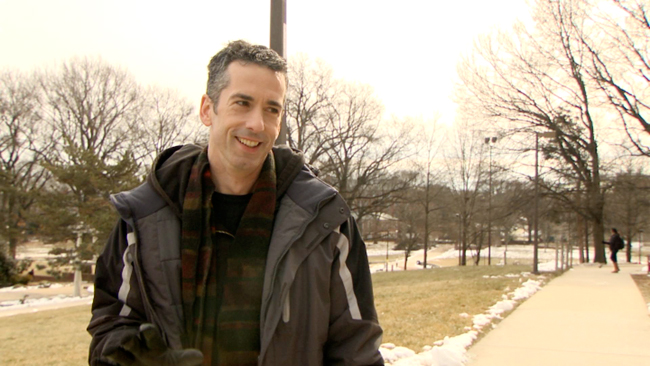 Tonight, syndicated dating columnist Dan Savage of the Savage Love column and podcast will premiere his new show, “Savage U,” on MTV U. The series brings Savage’s notorious wit to various college campuses to answer questions and address concerns on the sex and relationship lives of students.

The show features question-and-answer panels by Savage and his producer and co-host Lauren Hutchinson conducting one-on-one talk sessions with students looking to find answers to their relationship and sexual concerns. Each episode devotes itself to one campus, including Auburn University, University of Maryland and Texas Tech University (sorry, no UT yet).

Savage brought Hutchinson as a co-host on the show not only to monitor his rambling-prone mouth, but also to challenge him and provide another opinion to the show.

Savage, who attended University of Illinois at Urbana-Champaign in the ’80s, was openly gay in college and admitted that his dating options were pretty limited to a gay bar near campus.

Hutchinson, who attended Boston University, said she had an interesting experience because she considered her university a city school with a concrete campus that made it difficult to meet people. As a result, she witnessed a lot of her peers resorting to the “hooking up” style of dating, where many of the people she knew in relationships met only after hooking up that first night.

Both the hosts agreed that as they traveled through the country, the willingness of students to discuss a diverse array of sexual topics varied from region to region.

“The word ‘taboo’ speaks to some hang-up, and however off the wall your fantasies may seem to someone who doesn’t share them, it’s fine so long as you pursue them with someone who enjoys them,” he said. “Often, what’s considered to be taboo becomes more alluring.”

Savage noted that the most recurring topic was concerned students who tried to edit themselves to attract a potential partner. Savage said that holding back from who you truly are in front of a person you hope to date creates a facade, which can leave you discouraged before you ever even date someone.

“Among this overarching theme of how to communicate better in a relationship, there was this idea of ‘at what point is it time to stop playing the game?’” Savage said.

Though the topics varied, Savage felt that every university he visited shared a common curiosity for answers to reinforce the universal need to feel normal. Despite this common curiosity, Savage also mentioned that students are usually hesitant to discuss sexual topics. Savage tracked this back to the idea that being ignorant about sex is considered to be a virtue in our culture.

Savage feels that when our culture discourages young adults from asking questions about sex, they are left having to figure it out on their own, which can often be confusing and make them feel vulnerable.

“When people are intimidated by something, they act brave and bluff it,” he said. “There’s this idea that it all should just kind of happen, but we need to approach sex thoughtfully and with information.”

UT’s health education coordinator Guli Fager is excited about the show’s potential impact to remind society that college students are often neglected and forgotten in the sexual education debate. She believes that Savage’s 20 years of experience as a columnist and his funny approach to sex is easy for the college audience to relate to.

“I think this show is a good reminder that while sex is something to enjoy there are also really scary parts, and a show like this is an opportunity to talk openly about sexuality,” Fager said.

Psychology junior Holly Kerr is the president of the Longhorn Advocates for Communication, Education and Sexuality, which promotes sexual health on campus. Kerr is a reader of Savage’s column and looks forward to the premiere of “Savage U.”

“I think in the United States, most parents shelter their children from their own sexuality,” Kerr said. “With the right resources, young adults will be able to learn a lot more about their sexuality, how to be sexual safely, and how to truly enjoy it. I think this is the message that Savage is trying to get across.”

Savage said that he would love to see a sex-ed overhaul in the United States. He said that when sexual education promotes only abstinence, it consequentially makes people’s sex lives more dangerous, as they often don’t realize the potential repercussions of their actions until they actually happen.

The approach Savage would take instead? You’d be surprised at how he describes it.

“I take a very Catholic approach to sex-ed and sex information. Anybody who reads more than two to three of my columns knows that at the heart of it, I tell people that you should do unto others as you would have them do to you, in every sense and consideration, to be loved and respected,” Savage said.

For Savage, the best information about sex and relationships stems from being honest, having integrity and telling the truth, all of which are cornerstones of the Catholic faith.

“Sometimes it makes the Catholics angry when I tell them part of what inspired me to do this was being a Catholic,” Savage said of his career.

Savage said that the the goal of “Savage U” is to speak the same way about sex and relationships on television as he does in his column and on his podcast. Savage calls it a “reality-based” approach to sex.

So will the sexpert be heading south for an episode at UT? Savage said that right now, they’re waiting for the green light on season two, and hoping that colleges will be less reluctant to host the show’s Q-and-As. Only time and the UT administration will tell.