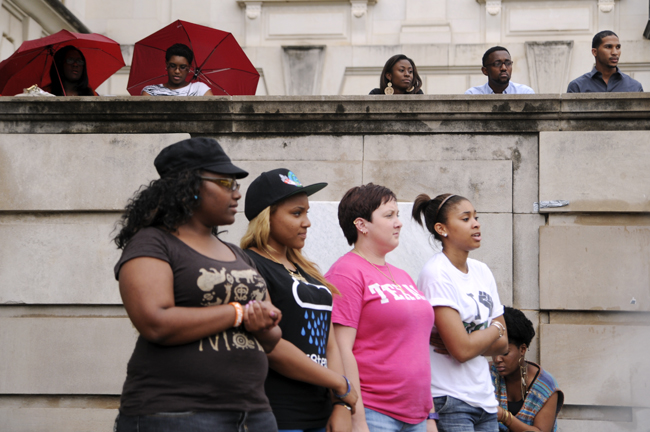 Students gather Tuesday evening to listen to speakers representing campus minorities speak about the destructive power of stereotypes in the wake of the killing of Trayvon Martin. The Black Student Alliance worked with Queer People of Color and Allies and other student organizations in an effort to bring multicultural awareness to the student body and break down barriers.

Sparked by the scrutiny of stereotypes uprooted by the killing of Trayvon Martin, more than 100 students rallied against discriminatory labels at the Main Mall Tuesday night.

Despite sudden rain, students and community members listened to speakers representing various minority groups on campus who spoke about their experiences with stereotypes and how they have been affected by the judgment of others during the “Trayvon Martin Rally Against Stereotypes.”

UT sophomores X’ene Taylor and Jasmine Graham organized the rally to speak out against the stereotypes that surrounded the Feb. 26 killing of 17-year-old African-American Trayvon Martin who was shot by neighborhood watch volunteer George Zimmerman in Sanford, Fla. Taylor and Graham organized the event with help from the University’s Black Student Alliance and other student organizations.

“I am not Trayvon Martin at 17, but I can still feel the stares because of the color of my skin when I walk into a room,” said keynote speaker Bishop James Dixon. “There is still this idea of a threat instead of understanding of the warped orientations of people who assume they know you.”

Dixson led the crowd in various chants about collective power and creating a movement out of the continuing issue of racism. He also encouraged the University to join with similar movements growing at other campuses.

“You are the power and you are the people,” he said. “This is not a white cause or a black cause. This is the right cause.”

Government sophomore Cortney Sanders told the crowd that the rally sought to show students that the groups people are part of should not label them as individuals.

The speakers identified themselves as a Chicano/a transgender student, a multiracial lesbian, a black Christian woman and a Latina who said she has been racially profiled as white because her skin color does not resemble what individuals assume Latinos look like.

UT alumna Audrea Diaz represented the disabled community. Diaz said labels affected her so much that she tried to kill herself twice because of it.

“I didn’t want to be known as ‘the disabled girl,’” she said. “But change starts from within, and I am a woman in recovery.”

Stereotypes make the gap between cultures wider, said vocal music performance sophomore Archana Narasimhan who also spoke at the event. When individuals look at “brown people” they automatically make assumptions of whom they are, she said.

“When people see me they assume I’m a science or engineering major or even that I am a terrorist,” she said. “The truth is I’m from West Virginia.”

Another speaker Roddrick West, architecture senior and president of Omega Psi Phi, said Texas is undergoing a demographic change, and it must appreciate the importance of diversity instead of allowing institutional racism to continue.

“[Trayvon’s killing] could’ve happened to any black male; for it was not the hoodie but the color of skin that led him to be profiled,” he said. “A person is still judged by the color of the skin and not the content of their character.”

A previous rally organized to raise awareness about the Martin case and institutional racism was held at the Capitol on March 27 in which more than 1,000 Austinites marched down Congress Avenue.

Regardless of how anyone feels about Martin’s death, stereotypes never leave a positive trail behind, said rally organizer Taylor.

“Is it worth thinking that every black person is going to steal my purse and every white person is going to hate me?” Taylor said. “At the end of the day, we need to stop creating George Zimmermans and stop killing Trayvon Martins.”