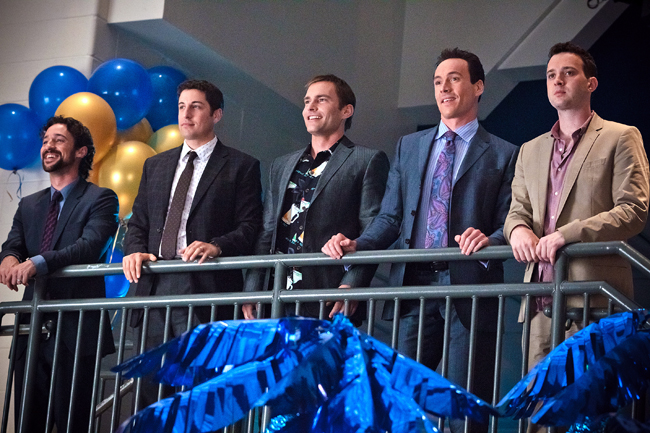 Ever since Universal Studios announced it was making “American Reunion,” the film had an uphill battle to fight. Since the undeniably fresh and funny “American Pie” came out 13 long years ago, the franchise has devolved from entertaining immaturity to crass scatological references that belonged in the discount DVD bin where most of the film’s sequels can be found. With “American Reunion,” the entire cast of the original is back, and the film does an admirable job justifying its own existence, even if it still fails to reach the heights and originality of the first film.

The film picks up roughly 13 years after the original gang left high school, and nine years after Jim (Jason Biggs) and Michelle (Alyson Hannigan) got married in “American Wedding.” Now saddled with a kid, some of the romance has gone out of their relationship, and Jim looks forward to getting back together with his friends from home. Oz (Chris Klein) is a sportscaster and is dating a model (Katrina Bowden), Kevin (Thomas Ian Nicholas) is happily married and Finch (Eddie Kaye Thomas) is still as mature and composed as he was in the first film. Stifler (Seann William Scott) wasn’t invited, but crashes the party anyway and proceeds to wreak havoc.

“American Reunion” really has one goal in mind: to let us catch up with these characters almost a decade later, and it succeeds in that goal. The best scenes are simply those that let the original cast members reunite and reminisce. While the film refrains from being nothing but lazy references to its predecessors, it pays off a few long-running jokes in satisfying fashion. Even more importantly, the film reaches for insight into what it means to be growing up. Even though most of its sentiments are obvious and uninspired, the fact that it’s trying at all is commendable.

As nice as it is to see these characters again, they’re saddled with a pretty standard plot. There’s plenty of sexual tension between long-lost lovers, and Jim finds himself fighting off freshly legal girl next door Kara (Ali Cobrin). Eugene Levy even pops up to give Jim some awkward advice, and their relationship continues to be one of the sweetest and most genuine things about the franchise. Too many of the film’s plots and jokes are standard sitcom fare. One set piece involving sneaking a drunk girl into her parents’ house is lazy in its setup and humor.

“American Reunion’s” biggest misstep is how it writes its female characters. No one’s going to be parading the first film around as a paragon of feminism, but at least its women had some surprising depth to them. “30 Rock” has proven that Bowden has a real comedic gift to go with her stunning looks, but “Reunion” doesn’t give her a single joke to play. Even worse is its absolute waste of Hannigan, whose character has grown from a charming dork to a nagging wife; most of her screen time is spent telling Jim to go hang out with his friends.

Even with its shortcomings, “American Reunion” is still just likable enough to recommend. When it tries for laughs, the film almost always fails, but when it just lets its cast bounce off of one another, it’s hard not to crack a smile.