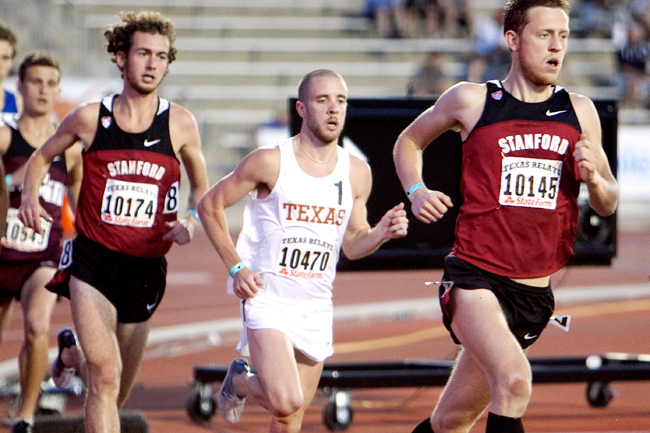 Brock Simmons, races between two Stanford Cardinal runners during last weekend's Texas Relays. He will run the 5000-meter at the Stanford Invitational.

Imagine Texas Relays with a slightly cooler breeze and equal levels of excitement — and you get this weekend’s 38th Stanford Invitational. A select group of the No. 5 Longhorns will barely have a chance to come off their runners-high as they pick up the intensity on the road.

Top high school, collegiate and professional athletes will be competing alongside Texas at the extravaganza in search of qualifying marks for the postseason. Longhorn sprinters and fielders will rest up from last weekend’s Texas Relays, while a group of distance runners head to Cobb Track and Angell Field at Stanford.

Sophomores Austin Roth and Collin Smith will compete in the 3000-meter steeplechase. Roth won the event at the UCLA Dual meet at the start of the outdoor season, while Smith came in third.

Boys and girls high school events will be scattered throughout the day, leading up to the climax of the evening. What’s known as the ‘distance carnival’ will begin today at 5:15 p.m. and continue late into the night. Collegiate and professional athletes will compete in a slew of ongoing distance races that will conclude with the men’s 10000-meter run scheduled for 10:44 p.m.

A Texas trio featuring Ryan Dohner, Craig Lutz and Brock Simmons will run as competitors in the 5000-meter. Dohner and Lutz will run in the second section of the event, while Simmons will compete in section three. This will be Lutz’s first race of the outdoor season, as the cross-country All-American was busy competing in cross country this past fall.

The Longhorns’ second trio of athletes, Mark Pinales, Will Nation and Rory Tunningley, will debut in the 10000-meter run for the first time in 2012. This event will also be the first go-round of the outdoor season for Nation and Tunningley.

The Cardinal boasts that their athletes will be among the top of the featured competition, and one of particular interest to Texas is senior Chris Derrick. The distance runner is a 13-time All-American and a three-time NCAA Runner-Up, as well as one of six men to finish in the top 10 all four years at the NCAA Cross Country Championship. He will use the 1500-meter run as a tune-up in preparation for the remainder of the season.