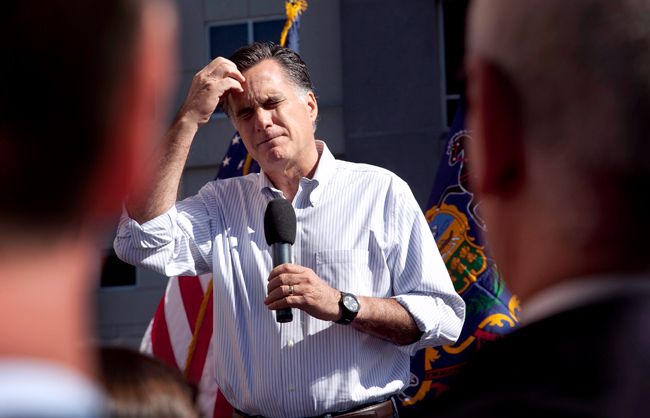 TUNKHANNOCK, Pa. — Mitt Romney is sharpening his focus on President Barack Obama and broadening his pitch to independents and Democrats. He has more security around him, his campaign team is growing and his crowds appear more excited to see him. It’s a different world for Romney now that he’s the almost-certain GOP nominee.

The transition from the primary season is well under way for Romney and his team as the former Massachusetts governor campaigns this week across Pennsylvania, which is sure to be a general election battleground state.

“It isn’t about one person or about even one party,” Romney told a cheering crowd Thursday at his state headquarters in Harrisburg. Working to appeal not just to his party any more but to the country at large, he said, “We’re Republicans and Democrats in this campaign, but we’re all connected with one destiny for America.”

With a broad appeal like that, it’s easy to forget that the GOP primary season is still under way and that Romney still faces a Republican challenge — though a weak one — from former Pennsylvania Sen. Rick Santorum.

Santorum badly trails Romney in delegates and is looking to revive his struggling candidacy on April 24 when this state’s Republicans weigh in on who should get the chance to challenge Obama this fall. Newt Gingrich and Ron Paul also have refused to abandon their bids despite huge losing streaks.

Romney is more than halfway to the 1,144 delegates needed to clinch the party’s nomination, and he could reach that total by June if not earlier at his current pace. On Tuesday, he racked up victories in Wisconsin, Maryland and Washington, D.C., and immediately shifted his focus to the Democratic incumbent with a pair of blistering speeches that castigated Obama and cast the fall contest as a choice between two competing ideological visions.

In the days since, Romney has returned to the campaign trail with a confident tone despite the significant hurdles he faces as he seeks to overtake an incumbent president at a time when the economy is showing signs of improvement.

His campaign announced Thursday that former Republican National Committee Chairman Ed Gillespie will serve as a senior adviser, the first of what aides say will be a big expansion of the Boston-based campaign team. Until now, Romney has kept his campaign on the small side and has relied on an intimate group of advisers. He knows he needs more as he prepares to compete across the country against a major Obama re-election effort.