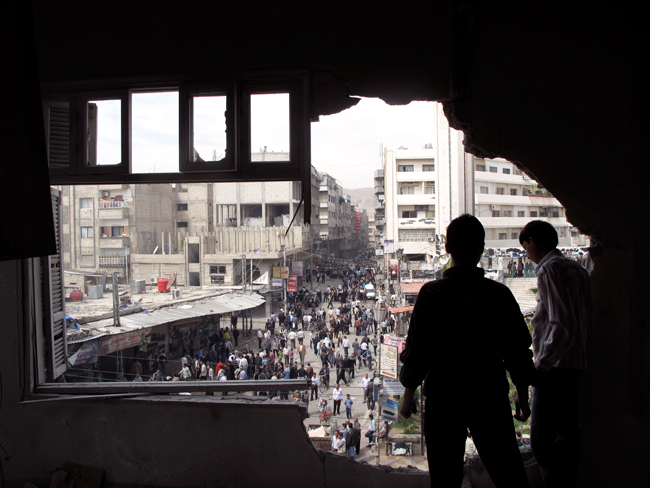 Youth stand in a building damaged by tank shells in a neighborhood of Damascus, Syria on Thursday.

BEIRUT — Syria launched a blistering assault Thursday on the outskirts of its capital, shelling residential areas and deploying snipers on rooftops as international envoy Kofi Annan demanded every fighter lay down arms in time for a U.N.-brokered cease-fire.

The bloodshed undermined already fading hopes that more than a year of violence will end soon, and France accused President Bashar Assad of trying to fool the world by accepting Annan’s deadline to pull the army back from population centers by April 10.

According to the plan, rebels are supposed to stop fighting 48 hours later, paving the way for talks to end Assad’s violent suppression of the uprising against his rule. The U.N. says more than 9,000 people have died.

“Can we be optimistic? I am not. Because I think Bashar Assad is deceiving us,” French Foreign Minister Alain Juppe told reporters in Paris.

U.N. Secretary-General Ban Ki-moon said the crisis was getting worse, even though the Syrian government accepted Annan’s plan March 27. Activists have accused the regime of stepping up attacks across the country, and they described Thursday’s assault in Douma as among the worst around the capital.

“Cities, towns and villages have been turned into war zones. The sources of violence are proliferating,” Ban told the U.N. General Assembly. “The human rights of the Syrian people continue to be violated. … Humanitarian needs are growing dramatically.”

He said the violence has not stopped and the situation on the ground “continues to deteriorate.”

Black smoke billowed from residential areas of Douma, about 8 miles outside Damascus, amid heavy cracks of gunfire. Douma, which has seen anti-Assad activities since the uprising began, has been subjected to several campaigns by Assad’s regime over the past year.

Activists said soldiers occupied Douma’s Grand Mosque, one of the largest in the area.

“No one dares to walk in the streets because of the snipers,” Syrian activist Omar Hamza told The Associated Press by telephone. “They are like stray dogs attacking sheep.”

He said the shelling went on for eight hours, damaging homes and setting shops on fire. Hamza said the government appeared to be trying to put the heavily populated suburb under control before the cease-fire goes into effect for fear that there will be massive anti-government demonstrations near the capital if regime troops withdraw.

Douma-based activist Mohammed Saeed reported that troops shelled residential areas Thursday with tanks in one of the most violent campaigns against the area since the uprising started.

He said troops were using detainees as human shields as they marched into one of the suburb’s main squares.

“Soldiers in the Ghanam Square near the vegetable market were walking behind detainees,” Saeed said via Skype. “They do that so that members of the (rebel) Free Syrian Army do not open fire at the troops.”

The Britain-based Syrian Observatory for Human Rights also said troops clashed with army defectors in the northern towns of Hraytan and Anadan near Syria’s largest city of Aleppo.

Observers have expressed deep skepticism that Assad will abide by the peace plan, in part because large swaths of the country could slip out of his control if he pulls back the troops.

Analysts say Syria likely will to try to manipulate the terms of the plan to buy more time, or to argue that the regime cannot lay down its arms when “terrorists” are on the attack.

The regime denies that the uprising is the result of a popular will in Syria, calling it a foreign conspiracy being carried out by terrorists and gangs.

Defense Minister Dawoud Rajha said Syria was ready to cooperate with Annan’s plan “as long as long as it also puts an end to the criminal acts being committed by the armed terrorist groups.” The Syrian Foreign Ministry disputed the U.N. death toll of 9,000, saying 6,143 people — “civilians and military, women and children” — have been killed.

Hilal Khashan, political science professor at American University of Beirut, said the regime is trying to make gains on the ground before the deadline.

“What will happen afterward is something similar to a low-intensity guerrilla warfare, which can go unnoticed by the international community, while the regime tries to give the world the impression that it’s all over and the reform operations are under way,” he said.

Even as the death toll mounts, there is little prospect for international intervention of the type that helped topple Libya’s Moammar Gadhafi.

Western leaders have pinned their hopes on Annan’s diplomacy, with the U.S. and its allies unwilling to get deeply involved in another Arab nation in turmoil. Several rounds of sanctions from the U.S. and the European Union have done little to stop the bloodshed, and Syria’s main allies of Russia and China are blocking strong action at the U.N. Security Council.

Still, the regime is under great pressure to comply with Annan’s plan in some way, because Russia and China have thrown their support behind it.

Annan traveled to Moscow and Beijing to secure that support. On April 11, the former U.N. chief is expected in Iran — Syria’s last significant ally in the Middle East — for another diplomatic push on Assad’s supporters.

“Clearly, the violence is still continuing,” Annan said from Geneva, speaking to the General Assembly in a videoconference. “Alarming levels of casualties and other abuses continue to be reported daily. Military operations in civilian population centers have not stopped.”

Syria has said it is withdrawing from certain areas, and Annan said Syria has informed him of a partial withdrawal from three locations in Daraa, Idlib and Zabadani.

But witnesses and activists deny that.

Mohammed Fares, an activist in Zabadani, denied claims that troops withdrew and said the army is still in the town with checkpoints backed by tanks.

“Troops and tanks are in Zabadani and around it,” he said by telephone.

Other activists reported attacks on both Daraa and Idlib on Wednesday. Activist groups reported about two dozen dead nationwide Thursday.

In planning for a possible cease-fire, a team led by Norwegian Maj. Gen. Robert Mood arrived in Damascus to begin discussing with Syrian authorities “the eventual deployment of this U.N. supervision and monitoring mission,” Annan’s spokesman Ahmad Fawzi said.

The deployment of U.N. monitors would first have to be authorized by the 15-nation Security Council.

Syrian Deputy Foreign Minister Faisal Mekdad said the government has not yet agreed on a timetable for peacekeepers. “But we will discuss these issues in a democratic way,” he said, “because we do want to listen to them.”As the fighting raged in the north, more Syrians fled to
neighboring Turkey, where the Foreign ministry said some 2,350 people arrived Thursday. Some 1,600 refugees arrived Wednesday and earlier Thursday, according to its disaster management agency. That pushes the number of displaced Syrians in Turkey to 22,000.