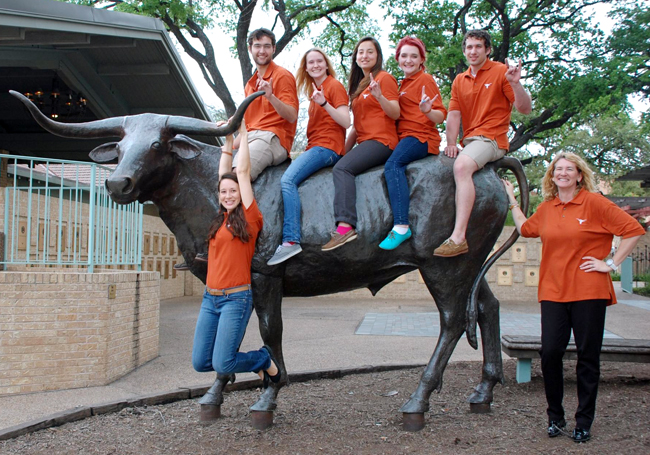 Members of UTs first bowl team showcased their Texas spirit atop a life-size longhorn. The students will compete in the National Association of the Deafs College Bowl, which offers deaf students the opportunity to interact with other students of the deaf community and compete in trivia events. (Photo courtesy of Rachel Mazique)

Students walking the 40 Acres are often accustomed to the ring of morning alarm clocks, the chimes of the tower and the trumpeted tune of “Texas Fight.”

However, the 62 students who make up UT’s relatively small population of deaf and hard of hearing students can’t hear those sounds.

For the first time in UT‘s history, five students will participate in the National Association of the Deaf’s College Bowl in Louisville, Ky. this July.

Lauren Kinast, assistant director for Deaf and Hard of Hearing Services in the department of Services for Students with Disabilities, said the academic bowl began in 1988 and has traditionally been a competition between its three legacy universities, top-tier schools for the deaf including Gallaudet University in Washington D.C., California State University-Northridge and the National Technical Institute for the Deaf at Rochester Institute of Technology in New York. Students from all universities competing in the bowl will spend the upcoming months learning trivia they will be quizzed on during the competition.

This year marks the first year that the bowl has opened the competition to non-legacy universities, and Kinast, who will serve as one of UT’s coaches, said she submitted a proposal to participate and immediately began looking for students interested in competing. Bowl competitors are required to be undergraduates in good standing with the University and will attend opening ceremonies as well as workshops and trainings, preliminary college bowl competitions, a Miss Deaf America Pageant and a steamboat dinner benefit event at the bowl, Kinast said in an email.

Kinast, who is deaf, said coming to a large university such as UT can be overwhelming for a deaf student.

“The best way to get a sense of what the environment feels like for a deaf student is to picture yourself as a person who doesn’t know sign language in an environment where everyone signs,” she said.

“Now, think of being in this environment every day. It can be tiresome and frustrations can kick in easily.” Deaf students face day-to-day challenges that students without hearing impairments aren’t often aware of, Kinast said.

“As a deaf person, I can’t just walk into the financial aid office and have a lengthy conversation with a counselor about my financial support,” she said.

Kinast said UT has made significant strides in making things accessible for deaf students, such as emergency text messages and closed captioning on the Jumbotron at Darrell K Royal Memorial Stadium, but day-to-day challenges still arise in the classroom setting.

“One of the challenges deaf students face is when instructors show videos in the classroom that aren’t captioned,” she said. “The assumption is because there are sign language interpreters, they can interpret the video, but this is not effective. Having to look at the interpreters then look at the video is very awkward and uncomfortable.”

Kinast said she is particularly excited for the bowl because of the awareness it will bring to the deaf and hard of hearing community at UT.

“The bowl will put UT on the map as a university with deaf and hard of hearing students,” she said. “We hope this will increase our visibility to prospective students from all over the U.S. to consider UT an option for their post-high school studies.”

Deaf students at UT enroll in the same curriculum for their chosen major as hearing students do, said Stephani Wolfe, Division of Diversity and Community Engagement executive director.

Arrangements are made to ensure interpreters or captioning options are available for the students, she said.

Duggan Baker, a bowl team member and Plan II sophomore, said he is participating to meet other deaf students like himself.

“It is wonderful to hang out with these guys because we all seem to have an understanding of what the other has been through in order to get to where we are now,” he said in an email. “They provide something my hearing friends do not. They understand what it is like to be deaf.”

Baker said the team is training steadily to prepare for the bowl, but said he’ll be thankful for the experience regardless of how the team fares against other schools in Kentucky.

“We’re working hard to study trivia and improve our knowledge base so that we can do our best to win,” he said. “Ultimately it will not matter if we win or lose. I will be happy with the friendships I have made and the things I have learned. Although, it would be nice to win.”

History sophomore Lisa Guerra is also participating in the bowl and said she is looking forward to the competition after months of trivia practice with the team.

“It is an honor because we, as a team, will be representing one of the largest public universities in America,” she said in an email. “I wanted to participate because this is a great opportunity to expose myself in a cultural aspect.”

Kalie Kubes, a bowl team member and human development and family sciences sophomore, said she feels many students aren’t aware of the deaf community at UT.

“I just think that we’re such a small community that if you don’t see us walking around or signing or in class with an interpreter, people don’t know,” she said in an email. “However, I’ve had wonderful professors who have been more than willing to help.”

Despite the day-to-day challenges she faces as a result of her hearing impairment, Kubes said UT has been a welcoming community.

“I’m actually enjoying being a deaf student in a mainstream school,” she said. “I love how curious people are and how many students actually want to learn to sign. It’s really inspiring and it makes me feel more comfortable here among thousands of people who may have never even met a deaf person.”