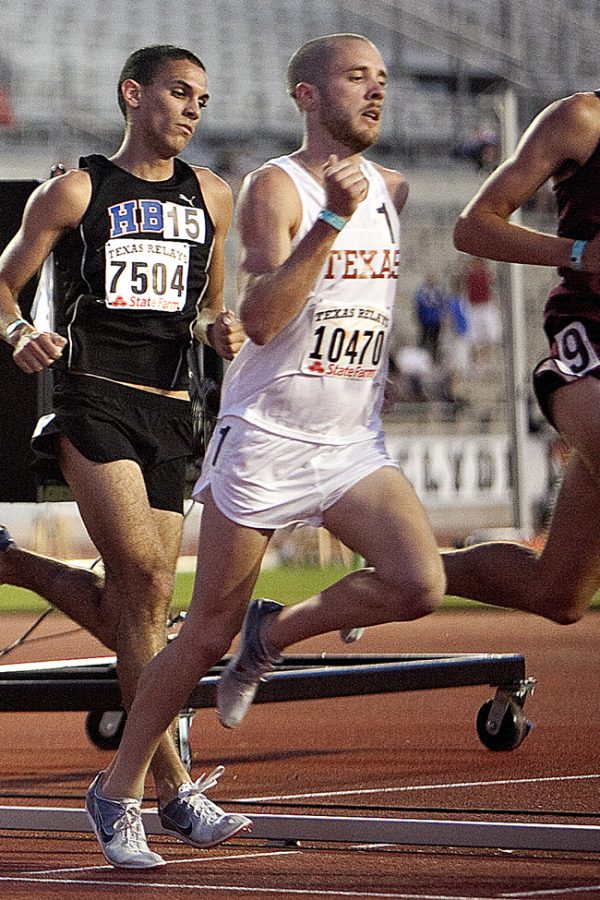 Brock Simmons runs at the Texas Relays last weekend. Simmons finished 14th in the 5,000-meter at the Stanford Invitational this weekend.

Several Texas distance runners made the trek to Palo Alto, Calif. to compete in the Stanford Invitational Friday.

The Longhorn trio of sophomore Ryan Dohner, freshman Craig Lutz and senior Brock Simmons finished within three seconds of each other in the 5000-meter run.

Dohner clocked in the top time of the three at 13:59.91 for 10th place. In his first collegiate outdoor debut, Lutz finished close behind Dohner with a time of 14:00.45 for 11th place.

Simmons came into the event as the only athlete of the troupe that had ever competed in the 5000, and his performance proved his experience. Despite his 14th-place overall finish, his time of 14:02.70 improved 21 seconds from his previous race in the event.

A second group of three Texas distance runners competed in the 10000-meter race. This marked the first time this season Texas had athletes represented in the event.

Sophomore Will Nation, junior Rory Tunningley and freshman Mark Pinales also stayed close together in the pack, allowing only seven seconds to separate them. Nation and Tunningley crossed the finish line simultaneously and clocked a shared time of 29:33.66. Nation received 25th and Tunningley 26th places. Pinales followed in close pursuit and posted a time of 29:40.34.

The final event for the Longhorns was Friday’s 3000-meter steeplechase. Red shirt sophomore Austin Roth competed in the event for just the second time this year and came in at 9:11:09 for 15th place overall in section two.

With a tune-up meet under their belts, the distance runners look to stay on track and remain consistent going into this weekend’s Texas Invitational. The entire team will compete together again beginning on Saturday, as they welcome familiar opponents back into their home arena.

Printed on Monday, April 9, 2012 as: Longhorns come up empty at Stanford