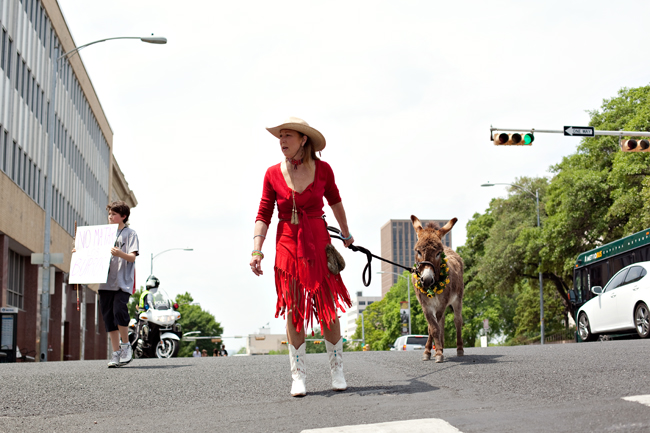 As part of the March for Mercy organized by The Wild Burro Protection League, Gayle-Suzanne Barron walks past the Capitol with Sir Buckaroo Bonzai Banjo Saturday afternoon.

With dreams of wild burros roaming safely in West Texas, residents traveled halfway across the state to protest at the Capitol.

The Wild Burro Protection League organized the “March for Mercy,” in which residents marched on Saturday alongside several burros down San Jacinto Street, around the governor’s mansion and to the Capitol in protest of burros being shot in Big Bend Ranch State Park. According to The Associated Press, 130 burros have been killed by park rangers since 2007. Marjorie Farabee, The Wild Burro Protection League founder, said the march was necessary because a petition delivered to the Capitol on Jan. 18 with 108,000 signatures was ignored.

She said there are fewer than 400 wild burros left in Texas.

“I don’t want to tell my grandkids there used to be an animal called the wild burro that lived here,” Farabee said. “The burros need to be found innocent of the crimes they are being falsely accused of without any research to justify it. The only animal committing a crime in West Texas is man. They are the only ones truly hurting the environment.”

Farabee said burros are being shot in masses because of false claims that they are detrimental to the environment and overpopulated. She said the burros help the environment by reducing flammable brush, fertilizing soil and bolstering the food chain.

“They are caring, gentle, family animals,” Farabee said. “They live together in groups and don’t spook the way horses do. When one is shot, the others don’t run away. They go over to the one that is down and nudge him and try to help him get up. Because of that, the rest are easy targets, and it’s just horrible. I don’t see how anyone can think shooting innocent creatures is right.”

Adrienne Evans is a resident of Terlingua, between Big Bend National Park and Big Bend Ranch State Park, who said she made the trip to Austin to represent the residents of the area who could not be there to speak. She read statements from West Texas residents on the steps of the Capitol.

“Burros are twice as smart as horses, live twice as long and their vet bills are half as cheap,” Evans said. “They are great pets and it’s proven they will work hard. If it weren’t for burros, Texas would not be the same place. They have helped us through history, in every war and every Texas settlement, and they still help us today but you never hear about it.”

“There is this mentality of killing the weak in today’s society,” Mancias said. “People always feel like they need to be making room for something else. These burros don’t have a voice, and none of this makes sense to them. We need to be that voice for them.”