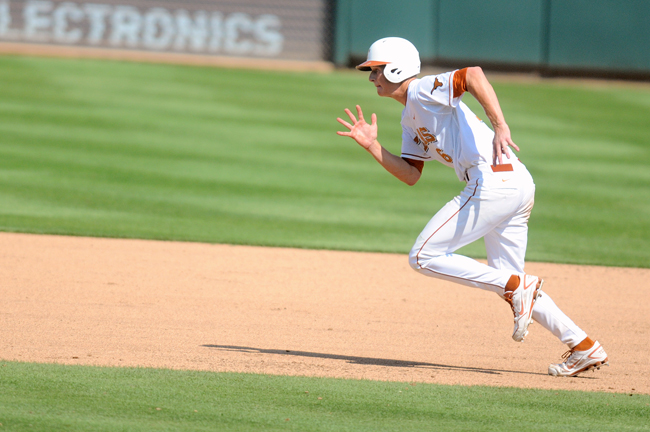 Texas sure knows how to come back from a 14-inning loss — just pound out 14 runs the next day.

Erich Weiss was the pace setter at the plate for Texas on the day, going 4-for-6 with three runs scored and a home run. His impressive day with the bat also gave Weiss a slight lead for highest batting average on the squad at .357, only .07 points ahead of his cleanup hitter Jonathan Walsh.

However, it’s not as if Walsh had a bad weekend, especially on Saturday when he went 3-for-6 with three runs scored.

It wasn’t just the middle of the Texas order that had a strong day with the bat either. Texas had six different players record at least two RBI in the game, including Mark Payton, Weiss, Brooks Marlow, Alex Silver, Taylor Stell and Jacob Felts.

Despite the loaded box score that the Longhorns put together, the Raiders did have the lead for the first third of the game, after they jumped out to an early 1-0 first inning lead.

The Longhorns took control in the fourth inning as they pushed across four runs across the plate. The inning started with two consecutive one-out singles from Weiss and Walsh, and then a single from Marlow plated Weiss to tie the game 1-1. Silver then followed that with the Longhorns fourth consecutive single, which scored Walsh and put them ahead 2-1.

From there the Longhorns did not relinquish the lead, and cruised to victory.

Friday evening’s game was not nearly as productive or easy going for the Longhorns, as they blew a two run lead in extra innings to drop the game, 7-6.

Texas was ahead 6-4 heading into the bottom of the 14th inning after pinch hitter Kevin Lusson came through with a single that scored two.

In the bottom of the inning a pair of poor defensive plays cost Texas the contest.

Fresh off of his heroics in the top half of the 14th, Lusson was unable to coral a sharp hit ball at first allowing Tech’s leadoff runner to reach. Then after a strikeout, the Raiders’ batter hit a ground ball at Jordan Etier that looked like it could be perfect for a game ending double play, but the senior was unable to field the ball, so the inning continued.

After a ground out, a single made the game 6-5. From there, the Longhorns intentionally walked the hard hitting Mason Randolph to load the bases. However, the decision backfired and third baseman Bryant Burleson came up with his first hit of the night — in the most important moment — to score two runners and end the game.