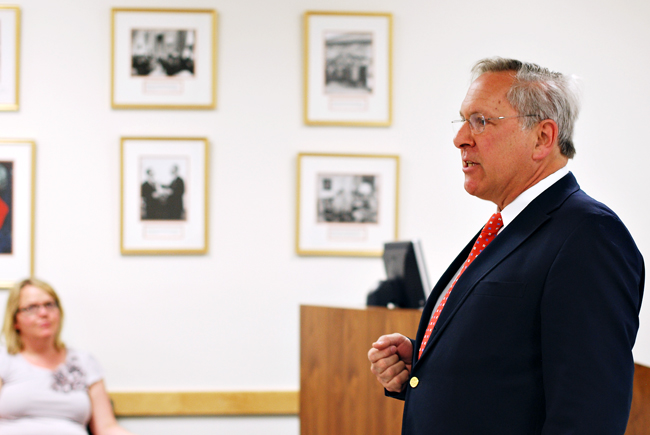 Pulitzer Prize winner David Hoffman, formerly of The Washington Post, spoke about the legacy of Anthony Shadid Monday evening at the Jesse H. Jones Communication building. The presentation was hosted by the Institute for Communication on Media and the Middle East.

Journalists, students and educators gathered Monday to discuss the work of Anthony Shadid, the Pulitzer Prize-winning reporter who had planned to visit the University before he died while fleeing Syria in February.

The Institute for Communication on Media and the Middle East hosted the talk, which featured a speech by Washington Post contributing editor David Hoffman followed by comments from School of Journalism director Glenn Frankel and professors Karin Wilkins and Robert Jensen.

At the time of his death, which was caused by an acute asthma attack, Shadid worked as a foreign correspondent for the New York Times. Prior to writing for the Times, Shadid won the Pulitzer Prize for international reporting in 2004 and 2010 for his work for The Washington Post.

Hoffman, who oversaw Shadid while serving as assistant managing editor at the Post, said Shadid exemplified a mastery of the art of journalism.

“He fulfilled an ideal for many of us as journalists,” Hoffman said. “He had shown us that it was possible to attain a kind of perfection.”

Shadid achieved that excellence by committing himself to the people and events he reported about, Hoffman said.

“Anthony would record every detail, every sight, every smell,” Hoffman said. “He would linger looking for clues.”

Frankel said Shadid’s method resonated with the title of the late reporter’s memoir, House of Stone.

“Reporting starts on the ground, going to see one person at a time, gathering little bits of material, like building a house,” Frankel said.

“Shadid’s work was this edifice of knowledge that he built one brick at a time. No one had this body of knowledge, and it gave him the altitude to see the Arab Spring coming.”

Shadid’s open-mindedness enabled his foresight into the future of the Middle East, Jensen said.

“He didn’t come in with a conclusion that he wanted to prove true,” Jensen said. “He did have assumptions that made him able to see things more clearly. One was that Arabs are fully human.”

Finding the human element amidst war was a theme of Shadid’s reporting, Frankel said.

“Anthony was always looking for that human moment,” Frankel said. “He was trying to get to the essence of that human suffering — to show you exactly what the price of war is.”

Hoffman said Shadid’s career will inspire the next generation of journalists.

“I don’t know who the next Anthony Shadid will be, but I hope there will be hundreds,” he said. “I just hope they pull Shadid’s books off the shelf and read the master.”