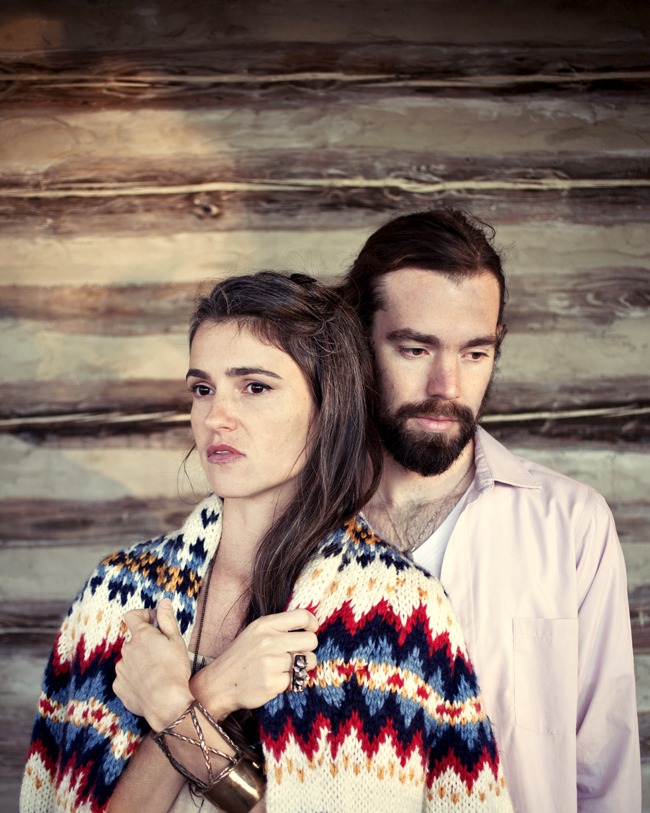 Eco-friendly musicians Beth Tacular and Phil Moore of Bowerbirds love spending free time in the great outdoors. The lyrics in their new album, The Clearing, convey plenty of imagery of the natural environment. (Photo courtesy of D.L. Anderson)

Building a cabin helps rebuild a relationship, at least in the case of couple Beth Tacular and Phil Moore of the band Bowerbirds. After a rough patch of restless touring and personal turmoil, the North Carolina-based band reconvened to bring a third LP to fruition.

With an unconventional background of having met near a dumpster behind a Whole Foods Market and recording an album in a small house built during the Reconstruction era, the folk ensemble has flourished to finally find steady success.

The Daily Texan exchanged emails with Beth Tacular to discuss how the Bowerbirds’ new album, The Clearing, helped overcome the gloom that seemed to persist and serves as a reminder of the beauty in the world.

The Daily Texan: The Clearing has been generally well received. What do you think of taking this step further into becoming better recognized?
Beth Tacular: It’s really great that more people are finding out about our music than they have in the past. We’ve been sort of flying under the radar for a while. Any new fans that we get allow us to tour more and to be able to bring these really talented musician friends with us on tour to help us create a fuller sound in a live environment. We are really grateful for that.

DT: What elements from your past albums do you feel translate over to The Clearing?
Tacular: Some of the song structures are more complex on this album, but the basic songwriting process remains the same. We’ve always been very emotionally connected to the music we write and perform. The themes of the albums have progressed in response to the changes in our life circumstances and changing views on life. We wrote Upper Air in between tours over the three years we toured those first songs, and while we built our cabin in the woods of North Carolina. Phil and I, who had been in a relationship for five years, actually broke up in the middle of recording that album. And then we toured it for a year while trying to work through issues in our relationship. That was really, really hard.

So when we decided to get back together and moved back out to the land and our cabin project, we were really intentional about taking our time with each other and with this next album. We realized we really needed time with each other to build the cabin and to rebuild our relationship.

For The Clearing, we set out to make an album from a positive outlook. We are sensitive people who are easily upset by problems in the world at large — wars, oppression and just anything you hear from the news media about how messed up the world is. This album is our intentional reminder to ourselves, and to anyone who listens, to focus on the beauty and wonder around us, rather than letting the darkness overtake us.

DT: What’s the songwriting process like at this point?
Tacular: This time, I was helping more with the songwriting duties. We also pretty much edited out anything that sounded like we were bumming out or being whiny in any way. Posi-vibes all the way on this one.

DT: Could you talk a little about the North Carolina cabin that you guys recorded in?
Tacular: Well, we recorded demos for all the songs on this album in a 150-year-old small house that was built by freed slaves during Reconstruction. It’s a very hodgepodge house with a lot of history. The house has sunken into the earth a lot, so all the floors and walls are very tilted. It’s pretty manky, but we can afford it, and it allows us to live right by our cabin project and our land.

DT: There’s a fair amount of imagery that relates to the natural environment within your lyrics. What’s the correlation between nature and Bowerbirds?
Tacular: Both of us are happiest in wild places. I think that when we met each other, we realized we’d found a person with a similar disposition and a person we got along with so well that we could go off and hole up together in a place away from other people and still be happy. Our love for the natural world and the land on which we depend for our lives is central to who we are as people. So that’s why natural elements populate our lyrics to the extent that they do.

DT: Are there ever times where you listen back on an album where you hear a younger Phil and Beth?
Tacular: Sure. I’d like to be friends with those people right now. That was us before life came down pretty hard on us. But I think that Beth would have liked to have been friends with the Beth I am now. I’d have a lot of good advice to give her.