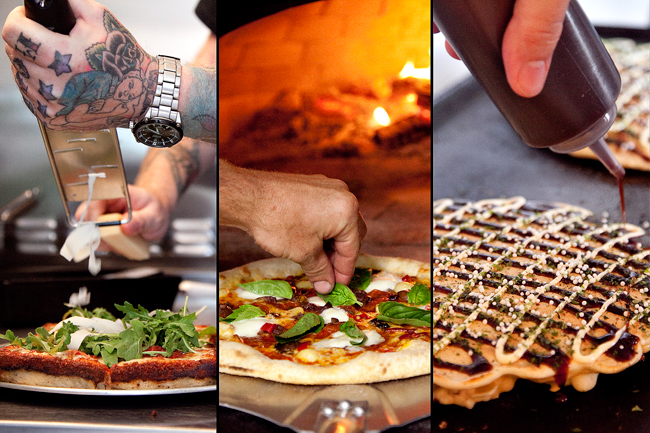 From left to ri

Food trailers are looking to establish their own niches to stand apart from the hundreds of food trucks, trailers and Airstreams in town. Whether it’s deep dish, thin crust or covered in traditional Korean kimchi, here are three pizza trailers that serve up tastes from across the country, and even the world, through a trailer window in town.

Okonomiyaki is commonly referred to as Japanese-style pizza, but is described as a savory pancake, said Osaka Soul trailer owner Drew Meadors. While each geographic region of Japan has its take on okonomiyaki, the city of Osaka puts its own spin on the traditional food by mixing the ingredients together and grilling them.

Bennett said that Okonomiyaki literally translates to “how you like it, grilled.”

Bennett and his wife loved sampling unique foods as they traveled but had trouble satisfying the urges of their newly discovered worldly taste buds after returning home from their trips. After wishing there was place in town where they could grab some okonomiyaki, they decided to open their own trailer in September 2011.

“We feel like this is Japanese soul food, and we felt like there was a bit of Osaka in us,” Bennett said.

Austin-born 22 year old Tim Tamez, who currently lives in Chicago, said he tries to stop by Osaka Soul each time he comes back home since he discovered the stand last spring.

“I get the Kabuki Mix because everything is better with bacon,” Tamez said about the bacon and kimchi topped pizza. “Their pizzas are just one of those weird cravings I sometimes get.”

When brothers Zane and Brandon Hunt moved to Austin from their hometown of Detroit, they were sampling pizza restaurants from Austin to Dallas to Houston, including smaller cities in between, in search of authentic pizza from “The 313,” Detroit’s original area code. After months of refining dough recipes and cheese blends, the brothers opened Via 313’s trailer windows last year.

Quintessential Detroit-style pizza is square so that when it is cut in four pieces, every slice is a corner piece.

“In Detroit, people would rather order two four-corner pies than one large pizza,” Zane Hunt said. “We’ve had barbecue lovers tell us that our edges are similar to the burnt ends of a brisket, and being here in Texas, we’ll take that comparison as high praise.”

Hunt said that the biggest challenges he faced were figuring out how to get the most out of the 8-by-16-foot space of the trailer and how to create a menu he was proud of without overfilling the trailer with ingredients.

With over 14 topping choices, from natural casing pepperoni to staple pizza vegetable toppings like bell peppers, olives and onions, Via 313 offers 12 varieties of pizza.

Additionally, Hunt said that the trailer’s limited space challenged the pizza makers to choreograph an efficient way to maneuver around the trailer while making their pizzas.

Journalism senior Brittany Christa said she enjoys the casual and laid-back ambiance of the trailer’s space as much as the pizzas.

“The pizza itself will turn even the most die-hard thin and traditional crust pizza connoisseur into a deep dish lover,” Christa said.

Owner of pizza trailer Firefly Pies Philip Caterbone grew up in an Italian family where food was more than a meal on the table; it was tradition. Caterbone’s passion for Italian food turned into a passion for pizza, specifically Neapolitan-style pizza, after he had a brick oven built in his own backyard years ago.

The heart of Firefly Pies is the trailer’s brick oven, which originally left Caterbone with questions like how the trailer would support the weight of the oven and how he would install the oven into the trailer while keeping it in once piece. Surprisingly, Caterbone said, the installation process went smoothly.

With the trailer’s signature brick oven, Firefly Pies serves up Neapolitan-style pizza that is thinly sliced with a thick outer crust that hugs the center and is always wood fired.

To keep the pizzas authentically Italian, most of Firefly’s ingredients including taleggio cheese and Italian bacon, are imported from Italy.

“I wanted to use the same Italian products I was used to eating since childhood,” Caterbone said. “So I wanted to bring a little bit of that to Texas.”

For customers willing to think outside of the pizza box, the Honey Pear pizza pairs unlikely toppings including fresh organic pears, honey, basil and roasted garlic to create a refreshing mix of sweet and savory flavors. The Eden pizza combines dried figs, tender prosciutto and crunchy pine nuts for a unique texture and sweet and salty flavor.

Jennifer Franklin, a 23-year-old Austinite, said she enjoys the surprisingly sophisticated menu of the trailer.

“This isn’t Roppolo’s, it’s brick-oven style pizza made with actual gourmet ingredients that comes to you from inside a trailer. It’s weird but cool,” Franklin said after taking a bite of her pizza drizzled with San Marzano red sauce and sprinkled with goat cheese and mushrooms.

For pizza cravings both gourmet and unique, Osaka Soul, Via 313 and Firefly Pies top the Austin pizza trailer list.