The Twerps on life down under, music, shows 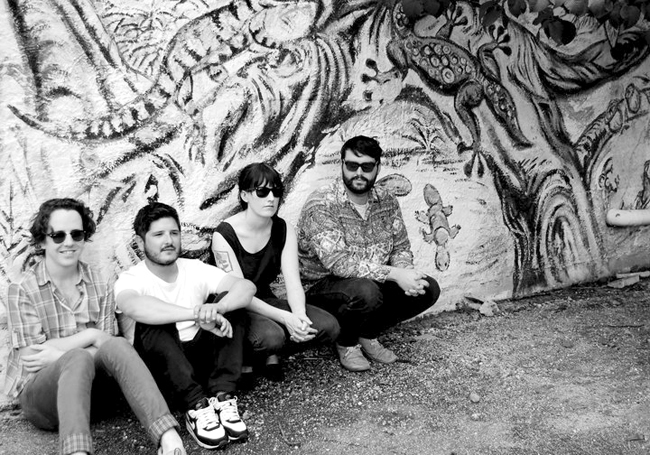 Up-and-coming indie rock group The Twerps will be opening for Real Estate tonight. Originally from Melbourne, Australia, the group is currently on their first ever U.S. tour. (Photo courtesy of Angaline Atkins)

Melbourne, Australia’s The Twerps are all about pop — their jangling, soak-on-the-beach guitars reminiscent of ’60s surf rock. Accompanied by luscious harmonies from frontman Marty Frawley and guitarist/vocalist Julia MacFarlane, the music rides on indie-pop jubilance and sends listeners into an euphoric dance frenzy. Their self-titled LP, released last year, attests to that. Its intricate guitar melodies are mesmerizing and memorable.

Looking forward to their Austin performance with band Real Estate, The Twerps’ Marty Frawley spoke via email with The Daily Texan about Melbourne hot spots, recording their self-titled LP and future plans.

The Daily Texan: How did the group come together?
Marty Frawley: Rick [Milovanovic, bassist] and I met at a video store we worked at, and he showed me a great deal of good music and also turned me away from a lot of the crap I was listening to. We didn’t try and write a song together ’til about four years later. After we made our first little number, we asked Pat [O’Neill, drums] to play drums, and then Julia joined. It has been a fun ride. We all try and look out for each other and make sure everyone’s digging it.

DT: You guys are currently on your second U.S. tour. How has it been so far, and how was your South By Southwest experience? Any crazy memories or noteworthy night tales?
Frawley: This tour with Real Estate has been heaps easier and heaps more fun. It’s nice traveling with others and having people to show us the ropes. They are the best. We played SXSW last year and did most of the major cities, but we did do it on our own which was a little tough. It definitely made us stronger. SXSW [this year] was hectic. Lots of drinking, tacos and shows. I see why people go and do it, but for us it was a bit much. We ain’t that type of band — we like to keep it
real chill.

DT: How was it recording your self-titled album with Jack Farley, and was it difficult transitioning from the lo-fi recordings you guys started off with to going into a studio?
Frawley: I don’t think it was entirely necessary, but it was a good experience. I think it’s always good to try new things and keep it fresh. [It was difficult] a bit, I guess. We didn’t really find it that difficult as Jack is one of our tight friends, and he knew what we wanted to do. So he just walked us through the stages and tried to highlight things we needed to do. Jack is the best. He knew what he should highlight in our sound and we are all really stoked with what we have achieved.

DT: Your songs are super catchy; I definitely dig it. What are some influences that helped direct the sound you all were going for?
Frawley: We all have a pretty eclectic taste in music, but after our last tour of the states, we came home with a really strong idea of wanting to sound like us. We also aren’t brilliant musicians so we are slightly limited, but I’m glad you like our tunes. My dad always used to say “Keep it simple stupid,” but we like a large catalog of Australian and New Zealand bands, as well as a lot of other guitar pop. We just want to sound like [indie rock band] The Go-Betweens, basically.

DT: Considering you guys are from Melbourne, where should a tourist go to get the full experience of what Melbourne is all about?
Frawley: Come to my work — Julia and I work there and we will play you some cool tunes and serve you beers. It’s called Hell Kitchen. There is a really good music scene in Melbourne with heaps of cool pubs. I guess if you wanted to party, you could go to Fitzroy. If you wanted to see the sea, you could go to St. Kilda, and if you felt like being heaps bored, you could go out to Glen Waverley.

DT: Lastly, what can we expect from you guys next before the year ends? Any new recordings or just touring?
Frawley: We are sorting that out on this tour, but we got a bunch of new songs so we’ll have to record them, and then sift through the ones we like and try and get a record out. We are keen to do something soon. We will also hopefully get to Europe and the U.K., and then back here, so hopefully you’ll be seeing a lot more of us.