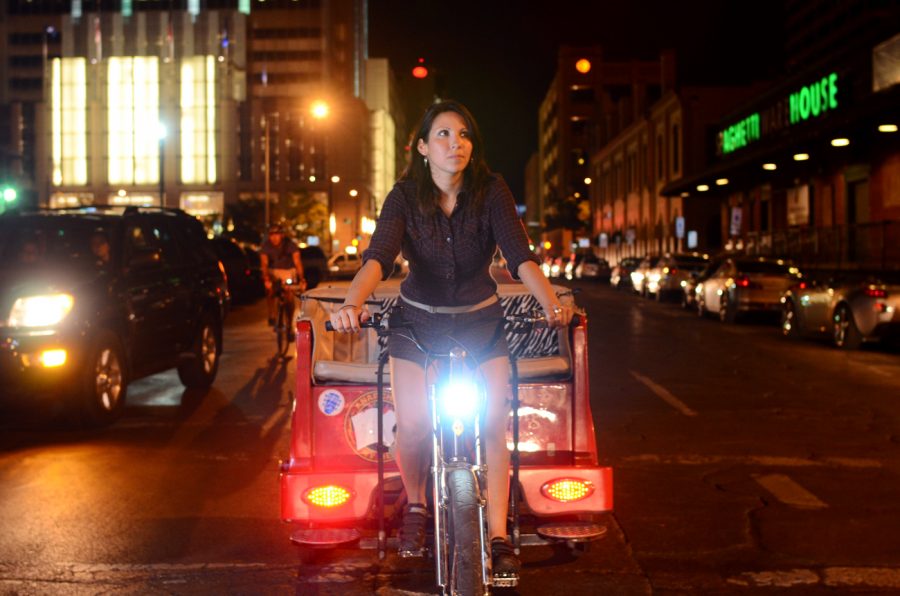 Pavielle Babai-Pirouz, a pedicab driver of four years, rides across 4th Street. Babai-Pirouz is concerned about the growing number of pedicab drivers and supports the new regulations to implement safety, insurance and control purposes.

With the increasing popularity of pedicab transportation downtown and in surrounding areas, Austin City Council members approved new regulations Thursday to hopefully increase safety of pedicab operation and use.

There are currently 341 permitted pedicabs and 24 Austin pedicab companies, which was one of the reasons to update the ordinance and implement regulations for safety, insurance and control purposes. The last time the pedicab ordinance was revised was in 1992 when Austin’s streets had only a dozen pedicabs.

Kathie Tovo, Austin City Council member, further discussed the ordinance during the council meeting and asked questions about the new regulations, which will go into effect April 22.

“From what I understand, the ordinance provides more requirements in terms of safety and insurance by making sure pedicab operators have appropriate levels of insurance in case of any kind of accident or injury,” Tovo said. Karla Villalon, spokeswoman for the Austin Transportation Department, said the updated ordinance allows pedicab operators to service people only within a certain area.

“It prohibits pedicabs from using private roads closed to traffic or roads within the jurisdiction of the state, including UT and the State Capitol complex,” according to information from the department. “Council also approved rules for pedicabs to operate within the barricade section of Sixth Street over the weekend so that pedicabs and pedestrians can coexist.”

Joi Harden, a policy aide for Tovo, said there is also a regulation on pedicab safety features.

“Pedicabs need to have brakes, lights and the pedicab operator’s information has to be displayed,” Harden said.

Harden said the most interesting regulation of the ordinance was that the city is considering permanently limiting the number of pedicabs and will not approve new pedicab permits for the next six months.

“Right now there’s no cap on the number of pedicabs in the city, and the amount of these vehicles has been steadily growing for the last few years,” Harden said. “After we see what effect these new regulations have, we will make a decision on whether a cap is in order.”

In addition, City Council approved a rule that would allow pedicab stands to be installed in areas downtown.

“The pedicab stands will be places, designated by signs, where nine to 10 pedicabs can wait for customers in high-traffic areas,” Harden said.

Apart from the ordinance, a resolution was approved to put together a program for street markings to designate where a smaller amount of pedicabs can park.

“Other than the pedicab stands, we’ve asked the city staff to design a marking to put on the street in places that are appropriate places for one to two pedicabs to park and wait,” Harden said.

Russell Williams, Capitol Pedicab manager, said the pedicabbers in the Warehouse District have clashed with police in the past, so the ordinance could help regulate the areas where pedicabbers are allowed.

Williams said he welcomes the ordinance, however, he’s concerned the ordinance will put more restrictions on pedicab operating boundaries.

“My fear is that they would progress the ordinances to the point in which we’re only allowed to solicit rides in the staging areas,” Williams said. “I don’t see it happening, but I fear it.”