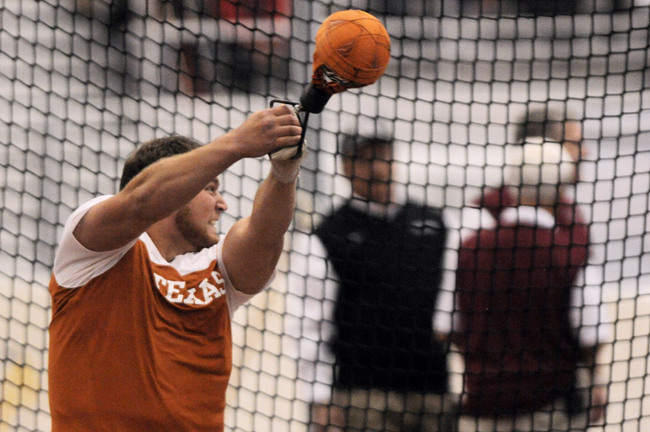 Senior thrower Jacob Thormaehlen, who helped Texas claim its first triumph in the shotput at the Texas Relays for the first time in 30 years, is one of 28 Longhorns mens track athletes set to compete this weekend.

Mike A. Myers Stadium will be the battleground of a Lone Star State showdown of sorts this weekend as the No. 6 Longhorns host their Texas Invitational meet on Saturday.

Texas and nine other collegiate teams throughout the state, including Houston, Houston Baptist, Prairie View A&M, Rice, Texas A&M-Corpus Christi, Texas Southern, Texas State, UT-Arlington and UT-San Antonio, will have one day to compete. With the Big 12 Outdoor Championships just a month away, athletes will likely bump up their intensity in order to get a better feel for where they stand regarding top times and qualifying marks.

The Longhorns will feature 28 athletes, and six of them have posted top 10 performances this season. This weekend’s meet will likely sharpen the Longhorns’ performances as they run alongside a group of 10 Olympic and nationally recognized runners.

The men are scheduled to kick off the events at 11:30 a.m. Saturday, beginning with the hammer throw. Field events will continue for almost the entire duration of the meet, ending with the shot put at 7 p.m.

The last time Texas’ throwers entered the ring, they came away with top performances in both the shot put and discus. Senior Jacob Thormaehlen and junior Hayden Baillio put on quite a show at Texas Relays, claiming first and second in the shot put with throws of 64-01.00 and 63-9 respectively. Thormaehlen currently has the top mark of 2012 in the shot put, while Baillio ranks fourth nationally. Freshman Ryan Crouser was able to take third overall in the discus with a heave of 195-6, earning him a fourth place national ranking.

Running events for the men are set to start promptly at 4:10 p.m., featuring the 4×100-meter relay. Texas’ Mark Jackson, Trevante Rhodes, Emerson Sanders and Keiron Stewart finished eighth at Relays but hope for a turnaround this weekend.

The running events are coordinated to run very quickly, with little delay between events. The sprint events, including the 100-meter dash, 110-meter hurdles, 200-meter and 400 meter will be action-packed, as they will feature undoubtedly the highest level of competition on the day.

Jerome Miller (unattached) of Baylor will be the solo elite athlete to compete in the 110-meter hurdles. Junior hurdler Stewart clocked a much-improved time of 13.46 for third place at Texas Relays, earning him the third fastest time nationally.

Elite athletes Jeremy Wariner (Adidas), Marcus Boyd (Nike), Reggie Witherspoon (World Express) and Michael Tinsley (unattached) will showcase their seasoned talent in the 400-meter dash, while Aaron Armstrong (API) and Carey Lacour (unattached) exhibit their speed in both the 100 and 200-meter dash. Texas’ Marquise Goodwin did not find himself atop the 100-meter medal platform at Relays, but has an excellent opportunity to post a personal best time while running against some of the nation’s most quick-footed competitors.

Also running in the 200 meters will be Tinsley, Mychal Dungey (New Era Sprint Club) and Witherspoon.

The decathlon will not take place this weekend, so decathletes Isaac Murphy and Petter Olson, currently nationally ranked first and fourth respectively, will change things up and compete in several singular events.

The Longhorns’ distance team, coming off difficult performances at last weekend’s Stanford Invitational, will surge into the 3000-meter steeplechase with a much different outcome in mind. Sophomore Austin Roth competed in the event for the second time at Stanford and finished in 9:11:09 for 15th place overall.

Texas looks to utilize Saturday’s events as an opportunity to get back on their feet and regain confidence going into the weeks of preparation ahead. The Longhorn men will close out the day with the 1600-meter relay at 8:40 p.m.