Weiss white-hot at the plate after early-season struggles 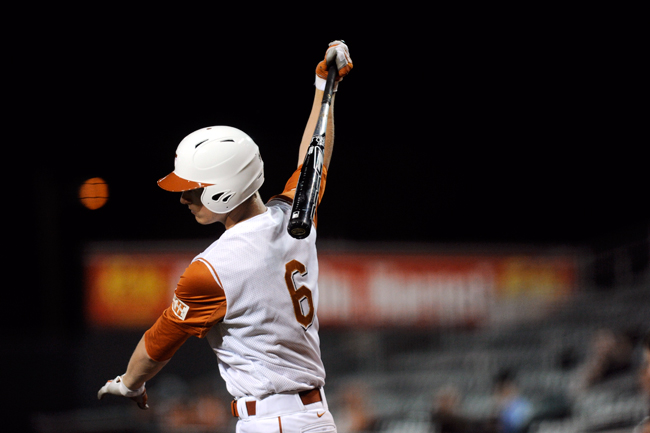 Sophomore third baseman Erich Weiss is hitting .464 with 24 runs and 18 RBI in his last 16 games after going just 5-for-28 at the plate in his first eight. Weiss now leads the Longhorns with a .370 batting average, a .469 on-base percentage, and a .588 slugging percentage. (Daily Texan File Photo)

Not many people had a better start to their college baseball career than Erich Weiss.

The third baseman from Brenham went on a ridiculous tear to begin his freshman season, getting hits in each of his first five at-bats and going 9-for-11 with six runs and 7 RBI in his first four games as a Longhorn. But Weiss didn’t get off to the scorching start in his sophomore season that he did in his first year at Texas. In the Longhorns’ first eight games this season, of which they won only three, Weiss hit .179 (5-for-28) while scoring three times and driving in three runs.

“At the beginning of the year, I was pressing a lot,” Weiss admitted. “I was swinging at some bad pitches in the dirt and stuff I couldn’t hit just because I was trying to get a hit and pressing when all you really have to do is see the ball and know whether or not it’s going to be a ball or strike when it crosses the plate.”

“I told myself at the beginning of the year, because I wasn’t doing too hot, to keep looking forward and keep running everything out, keep hitting the ball hard and it’ll find holes,” Weiss said. “And it has, for all of us. We’re all hitting very well right now.”

As tremendous as Weiss has been over the last month, he’s been particularly good over the last week. The sophomore third baseman earned Big 12 Player of the Week honors after going 10-for-17 in Lubbock last weekend against Texas Tech. The Longhorns won two of three games from the Red Raiders with the only loss being a one-run, 14-inning defeat Saturday. Texas went on to beat Texas A&M-Corpus Christi, 9-2, Tuesday night as Weiss went 3-for-4 with 3 RBI. He’s batting .619 in his last four games.

“We had a little joke this past weekend that we wanted to get 10 hits between both of us, and he got the 10 hits by himself,” said sophomore first baseman Alex Silver, who is currently riding a 16-game hitting streak. “This is the Erich Weiss that I knew last year. He started a little slow. But it’s just one of those things where he gets so locked-in that nobody can get him out. It’s unreal watching him play.”

Weiss is now reminding his teammates of the way he played last season, when he led the Longhorns with a .348 batting average, 45 RBI, a .483 on-base percentage and a whopping .518 slugging percentage. So far this year, Weiss has regained his place as the squad’s leading hitter as the 6-foot-3, 190-pounder has team-high marks in batting average (.370), on-base percentage (.469) and slugging percentage (.588). Only Brooks Marlow’s 22 RBI top the 21 runs Weiss has driven in.

“I’m in a zone right now,” Weiss said. “I feel comfortable right now. Whenever the ball comes across the plate, I’m going to hit it hard.”

Texas has not had a hitter post a better batting average than Weiss’ current .370 mark since Chance Wheeliss batted .376 in 2007. And if Weiss maintains the same pace over the final 20 regular season games that he was maintained in his last 16, he’ll become the first Texas hitter to bat better than .400 in a decade, when another Brenham native, outfielder Dustin Majewski, batted .401 in 2002. But someone thinks Weiss could do even better.

“He might end up batting .500. Who knows?” said sophomore right fielder Mark Payton, who has had an impressive year at the plate in his own right, reaching base in each of the Longhorns’ 30 games this season. “It’s his time right now and we know this is who he was last year. And we knew it was inside of him. He’s a great player and a great hitter. We’re excited to see what he’s going to do this weekend.”