Only 5 Dead as tornados swept through Midwest 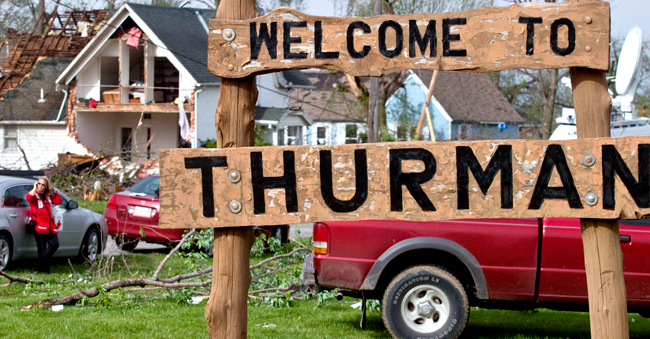 A house sits ripped-open from a tornado on Sunday in Thurman, Iowa. Thurman appeared to be the hardest hit community in Iowa, but storms caused damage elsewhere in the state, as well as in Nebraska. There were more than 100 reports of tornadoes across the Midwest.

WOODWARD, Okla. — The television was tuned to forecasters’ dire warnings of an impending storm when Greg Tomlyanobich heard a short burst from a tornado siren blare after midnight Sunday. Then silence. Then rumbling.

The 52-year-old quickly grabbed his wife and grandson, hurrying them into the emergency cellar as debris whirled around their heads at their mobile home park in northwest Oklahoma. They huddled inside with about 20 other people before the tornado — among dozens that swept across the nation’s midsection during the weekend — roared across the ground above, ripping homes from their foundations.

“It scared the hell out of me,” Tomlyanobich said.

The storm killed five people, including three children, and injured more than two dozen in Woodward, a town about 140 miles northwest of Oklahoma City. But it was the only tornado that caused fatalities. Many of the touchdowns raked harmlessly across isolated stretches of rural Kansas, and though communities there and in Iowa were hit, residents credited days of forecasters’ urgent warnings for saving lives.

When Tomlyanobich emerged from the underground shelter after the storm subsided, he saw a scattered trail of destruction: home insulation, siding and splintered wood where homes once stood; trees stripped of leaves, clothing and metal precariously hanging from limbs.

“It just makes you sick to your stomach. Just look at that mangled steel,” he said Sunday, pointing to what appeared to be a giant twisted steel frame that had landed in the middle of the mobile home park, which is surrounded by rural land dotted with oil field equipment.

The storms were part of an exceptionally strong system tracked by the National Weather Service’s Storm Prediction Center in Norman, Okla., which specializes in tornado forecasting. The center took the unusual step of warning people more than 24 hours in advance of a possible “high-end, life-threatening event.” Center spokesman Chris Vaccaro said the weather service received at least 120 reports of tornadoes by dawn Sunday and was working to confirm how many actually touched down. The storm system was weakening as it crawled east although forecasters warned that strong thunderstorms could be expected as far as Michigan.

Woodward suffered the worst of the destruction from the storms, which also struck in Kansas, Iowa and Nebraska. Woodward City Manager Alan Riffel said 89 homes and 13 businesses were destroyed, and bloodied survivors in the 12,000-resident town emerged to find flipped cars and smashed trailers.