Was a little bit of Magic all the Dodgers needed? 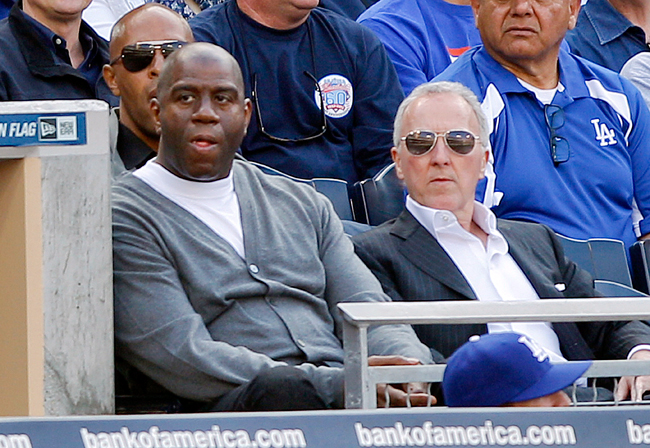 Nearly a year ago to the day Major League Baseball Commissioner Bud Selig assigned an MLB representative to oversee the day-to-day operations of the Los Angeles Dodgers.

The move came as a measure to remove Frank McCourt as owner due to financial irresponsibility over the past seven years, and to protect the club’s best interest.

In the following 11 months, MLB took over ownership of the team as the franchise filed for Chapter 11 bankruptcy and was eventually purchased for a record $2 billion by Earvin “Magic” Johnson and his very wealthy business associates who I’m not going to list because none of them are as famous, or as tall, as Magic.

The Dodgers aren’t the only team to undergo a grand re-opening of sorts under new management this season, but McCourt’s pricey divorce settlement with estranged wife, Jamie only added to the media attention surrounding them in the off-season.

Jamie McCourt, former CEO of the team, reportedly received $130 million in a settlement that included her renouncing her claims to the franchise, thus ending the most expensive divorce in California state history. Sorry Kobe, she wasn’t shooting with anyone in the gym, either.

Now that the whole ordeal is behind them, the Dodgers seem to be playing comfortably, resulting in a 9-2 start to the season.

Matt Kemp and Andre Ethier, two names you’ll be hearing for a long time, are on an absolute tear to start the year, combining for nine homers and 31 RBIs in just 10 games. Big, powerful numbers, and they’ve also combined for 30 hits and are both getting on base nearly every time they step up to the plate.

Kemp’s average is still in the stratosphere at .472 , but he’s in a groove and may not cool down until the All-Star break. He’s really found a home in the Dodgers’ outfield and his decision to split with singer Rihanna is looking wiser by the day.

The Dodgers’ pitching has finally come around and the starting rotation has been solid. Chad Billingsley has been mowing batters down and is out to a quick 2-0 start on the mound, while Clayton Kershaw has struggled a bit in the early going.

Kershaw hasn’t had a decision in three starts, but the team is 3-0 when he’s on the bump. He’ll turn things around, but the good thing is that the rest of the team has shown it can pick up the offense if someone is having a bad day on the mound. Good teams will find ways to win, and although it’s still early in the campaign, the Dodgers have shown the ability to do so.

I don’t know whether it’s the divorce settlement or the fact that this may actually be the best team in baseball that intrigues me more, but I’m jumping on the Dodgers’ bandwagon. If for no other reason than the possibility of seeing either a belligerent Rihanna or Jamie McCourt running through the outfield like that one British guy who streaks at seemingly every soccer game, I’ll be watching the Dodgers this year.

Published on Wednesday, April 18, 2012 as: Split from McCourt regime makes way for a little Dodger 'Magic'