Don’t sleep on the Spurs 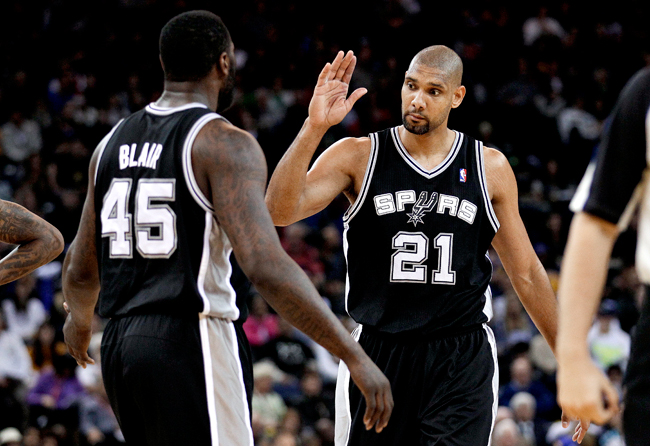 Tim Duncan (21) high-fives center DeJuan Blair (45) in a recent game. The Spurs and the Thunder are in contention for the top playoff seed in the West.

The San Antonio Spurs are the team to beat in the NBA’s Western Conference.

Sure, the Oklahoma City Thunder are loaded with young talent, the Dallas Mavericks are the defending champions and the Los Angeles Lakers have five-time NBA champion Kobe Bryant, but the Spurs have depth.

And Spurs head coach Gregg Popovich’s bunch is hungry after last season’s embarrassing exit in the first round of the playoffs at the hands of the eighth-seeded Memphis Grizzlies.

San Antonio has quietly jumped to the top of the Western Conference, fighting the Thunder for the No. 1 seed in the playoffs, which begin April 28.

“We love our position [in the West], obviously,” center Tim Duncan told reporters Tuesday. “We hope to hold on to it. We’re facing a tough schedule, but we’re feeling good and we’re staying healthy.”

Health is paramount for the Spurs, who could care less about seeding.

“We won [61] games last year. Remember we lost right away. One would think that maybe it doesn’t matter,” Popovich said when asked about the importance of getting the top seed.

The Spurs are a far different team than they were a season ago, because their bench is among the league’s best.

Rookie swingman Kawhi Leonard plays and defends multiple positions. Forwards Tiago Splitter and DeJuan Blair are each a force in the paint. Matt Bonner is a 3-point specialist with size. Gary Neal scores in bunches. Patrick Mills goes baseline to baseline in a flash.

And if that wasn’t enough, the Spurs got more help at the trade deadline.

Boris Diaw looks reborn after coming over from the lowly Charlotte Bobcats, and Stephen Jackson hasn’t skipped a beat in his return to the team he won an NBA Championship in 2003.

Jackson started the year with Milwaukee before being acquired March 15. He’s a proven champion with a repuatation for being a tough guy.

“He’s got an edge to him,” Popovich said. “I like his edge; I like his toughness, his grit, his willingness to play in big situations. All those sorts of things are what I like.”

The Spurs lacked Jackson’s toughness a year ago as the Grizzlies muscled San Antonio out of the playoffs. That won’t happen again with Jackson in the fold. He’s a fearless competitor notorious for his role in the infamous 2004 brawl between the Detroit Pistons and Indianapolis Pacers.

“I’m all about my team,” Jackson said. “Whatever it takes to protect my teammates, to be with my teammates, I’m going to ride it to the end. That’s all I know.”

The Spurs don’t have the flash of the run-and-gun Thunder or the glamour of “Lob City” and the Los Angeles Clippers.

What they do have is a veteran corps led by four NBA champions, a seasoned coach and a deep bench full of rising stars and castaways with something left to prove.

San Antonio has never won an NBA title in an even-numbered year, but all that could change come June.

Printed on Thursday, April 19, 2012 as: Ageless Spurs continue to roll