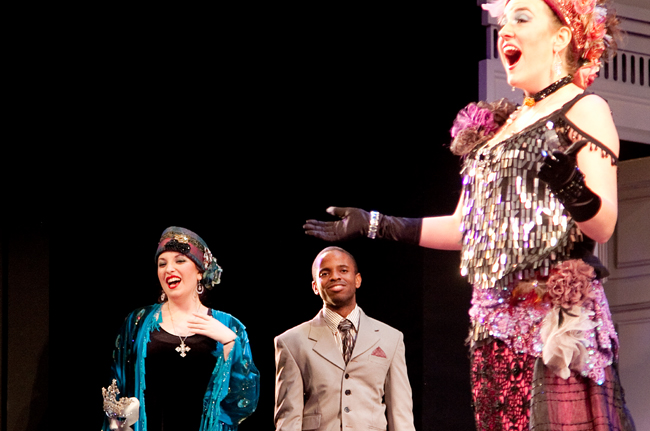 When flight and linear system dynamics meet with an unexpectedly vibrant tenor voice, the world gets Brandon Steele: a fifth-year aerospace engineer major with a zealous passion for singing.

Steele will perform in Johann Strauss’ Die Fledermaus Friday and again with the University’s Undergraduate Opera Ensemble in May.

Last Saturday, Steele performed a self-administered recital. The high pitch and rich inflection of his voice shimmered in the forefront of a Methodist sanctuary. It was his first performance ever where he solely showcased his voice to family and friends, their open mouths, raised brows and widened eyes strewn throughout the room.

While Steele’s opera voice, which sounds as if he’s had years’ worth of formal training, may have you fooled, he has merely scratched the surface of what he plans to be a long-lasting relationship with music and his singing voice in particular. Steele realized he had a natural ability for singing when he played the Hot Chestnut Man in his high school’s rendition of “A Christmas Carol.”

“Ever since high school I wanted to take voice lessons,” Steele said. “But I felt it was more important to pursue cello and continue improving on my piano skills. Voice would be something I’d do later.”

Steele started playing piano at age seven and shortly after displayed a knack for playing cello.

“I chose to pursue instruments because I’d already spent time and money on them,” Steele said. “I love [playing my instruments], but I felt I was just okay at singing and it wasn’t something I could go far with.”

Herminia Thompson, Steele’s mother, said she did not know her son had singing abilities until he was 14.

“He said he didn’t want to tell me because [he thought] I’d make him sing at church,” Thompson said.

She explained that Steele does not come from a musical background. None of his family members pursued a career in music. Nevertheless, both his grandmothers and a few aunts sing for pleasure.

“When he was a kid, Brandon was sitting in the backseat of his dad’s car and Michael Jackson was playing,” Thompson said. “When he hit the high ‘hee-hee,’ Brandon sang along, and his dad looked back at him, shocked.”

And while there were traces of Steele’s hidden talent growing up, it wasn’t until after Steele met a few music majors his freshman year of college that he started to learn about opera singers and different voice types.

“Before college, I didn’t like opera,” Steele said. “It just sounded so weird.”

But thanks to his music major friends, Steele became interested in the art and started imitating what he heard.

“Once I got to my fourth year, I joined men’s chorus,” Steele said. “I started learning about actual vocal technique, so that inspired me to take voice lessons.”

Steele feels that a classmate who knows a subject well can sometimes explain music dynamics better than a professor because of a mutual understanding between peers. Steele would ask his friends, who he held in high esteem, how to manipulate his voice and try to work with the bits of advice he got until he found a voice instructor.

“One of my classmates set me up with David Small [my current voice instructor],” Steele said. “When I went to sing for David, I was expecting to afterward set up an audition, but instead he just wanted to schedule actual classes, accepting me as his student right after I sang for him.”

Voice professors are not allowed to teach students who aren’t voice majors, because priority goes to people pursuing the art as a career. But Small made an exception for Steele because of his genuine passion for singing.

“I love singing, and I just can’t explain how it makes me feel,” Steele said. “I think [Small] saw that, so he didn’t worry about the ‘rules.’”

Small said that Steele holds an obvious respect for classical singing and his inquisitiveness and willingness to go the extra mile is something he wishes he could instill in many more of his students.

“I think Brandon is a shining example of someone who must have music and singing in his life,” Small said. “It doesn’t matter to him where it leads or whether or not he achieves any sort of career success. It’s an activity, an art, a love that he must have, and so he insists that it stay a part of his life.”

Small thinks Steele has already found success from his sheer enjoyment of music-making.

“I hope we all can find that same kind of success in our lives, whether or not it has anything to do with how we make our living,” Small said. “Art matters, being creative matters, and if we ignore the need to create, I don’t think we truly live.”