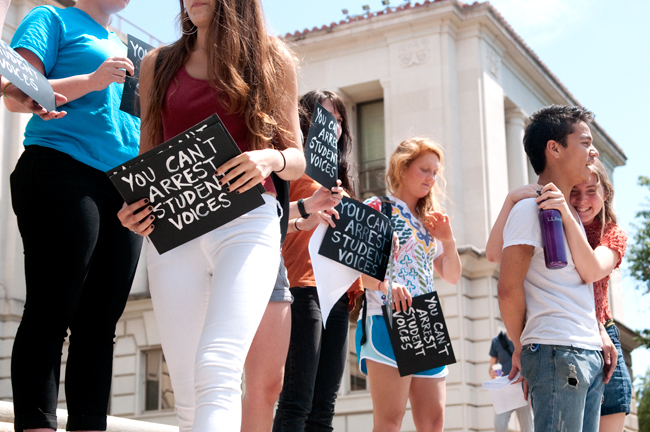 International Relations and Global Studies senior Billy Yates is embraced by a friend as he prepares to speak out against the arrests of 18 students at the UT Sweatshop-Free Coalitions protest Wednesday. The group gathered in front of the tower Thursday afternoon to demand that President Powers drop the charges against the students.

All 18 protesters arrested Wednesday in the lobby of President William Powers Jr.’s office were released from Austin Police Department custody Thursday morning and gathered on the Tower steps at noon to reiterate their message and rally support.

The protesters, who are members of the Make UT Sweatshop-Free Coalition, drew more than 50 people to the rally.

Shingavi said the Fair Labor Association, the labor monitoring organization with which UT affiliates, fails to ensure the basic rights of factory workers producing UT apparel because it is beholden to the corporations it ostensibly monitors.

“Asking the FLA to verify that there are no human rights abuses is like asking [former Pennsylvania State University football coach Jerry] Sandusky to make sure there is no pedophilia,” Shingavi said.

The University should instead join the Worker Rights Consortium, an independent labor rights organization that protects workers’ rights, Shingavi said.

Standing near the marble plaque where the University’s Core Value — to transform lives for the benefit of society — is engraved, de Lissovoy said the University should stand behind the arrested students.

“Instead of prosecution, the University should think about supporting these students,” de Lissovoy said. “They acted upon the principles that any decent liberal arts and sciences education should stand for. We as educators should support this.”

As of 6 p.m. Thursday, more than 20 UT faculty members had signed an online open letter to the administration requesting that the University drop all charges against the students.

The group has been protesting the University’s affiliation with the FLA for at least two years.

Speaking on behalf of the University’s administration, director of media relations Gary Susswein said Wednesday’s protest has not changed the University’s stance on the issue. UT will maintain its affiliation with the FLA and will not join the WRC, he said.

“Our position remains the same,” Susswein said. “The issue is closed.”

Yates said Wednesday’s acts of civil disobedience opened up a new period of opportunity for the movement to eliminate the production of UT trademarked apparel in sweatshop conditions. Yates serves as a regional coordinator for United Students Against Sweatshops, which broadly defines sweatshops as any place where the human rights of workers are abused, according to the USAS website.

“This is really a new beginning,” Yates said. “[Wednesday’s events] have really reinvigorated our campaign. Community members, donors and alumni are upset that students are being arrested for this. Now it’s a matter of mobilizing these people to take it to the next level.”

The coalition’s plan is to use its momentum to make President Powers aware that many members of the UT community support the University joining the WRC, Yates said.

“This whole next week we will have delegations of community supporters — from students, from nonprofits, from faculty — deliver letters to the president’s office,” Yates said. “It should be peaceful.”