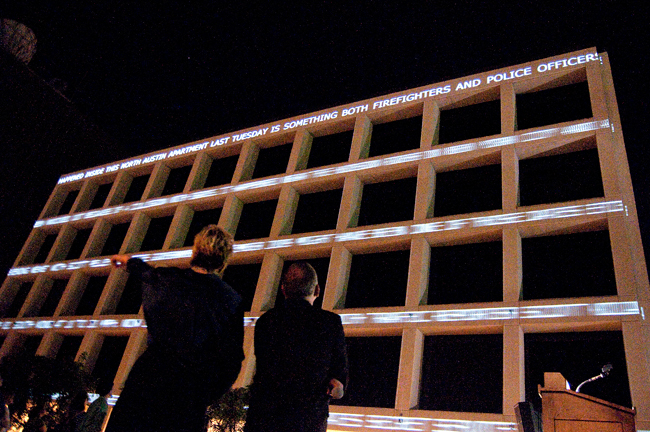 Ben Rubin (right) watches as his digital art installation in honor of Walter Cronkite is projected across the side of the CMA building.

The Communication Plaza will glow bright each night with the work of a former UT student, as the plaza was dedicated Thursday evening in honor of journalist Walter Cronkite.

The dedication of the Walter Cronkite Plaza took place yesterday in front of the Jesse H. Jones Communication Center. Cronkite served as anchorman for the CBS Evening News from 1962-1981, a period of major national controversies including the U.S. Civil Rights Movement, the assassination of President John F. Kennedy and the Vietnam War. Cronkite began his education at UT in the fall of 1933, but left without earning his degree during the fall of 1935.

The dedication speech was accompanied by a digital art installation by media artist Ben Rubin entitled “And That’s the Way It Is,” named for an iconic catchphrase used by Cronkite at the end of many of his news broadcasts. The piece was commissioned for the College of Communication by Landmarks, the University’s public art program, and will use lighting to display images and text from Cronkite’s news broadcasts, along with current news coverage, across the south side of the Communication Building.

The piece will be displayed from dusk until midnight each night “indefinitely,” said Nicolas Hundley, spokesman for the College of Communications. Rubin answered audience questions about the piece prior to the ceremony.

The purpose of the work is to both honor Cronkite and foster research regarding the differences between past and present news coverage, Rubin said.

“It’s really just a way to accumulate a lot of data and analyze it,” he said. “You never know what we can do with it.”

Cronkite’s in-depth and informative coverage of these events brought him to national prominence, earning him the nickname of “the most trusted man in America,” said Don Carleton, executive director of the Dolph Briscoe Center for American History and a personal friend of Cronkite.

“[Cronkite’s] work earned him the respect of an entire generation of journalists,” he said.

Brian Jones, UT alumnus and anchor for CBS Sports Network, spoke at the event about his experience growing up watching Cronkite and the way the nation was able to gain important political clarification from his reporting.

“Cronkite represented certainty in an uncertain world,” he said. “We now strive to continue Cronkite’s traditions at CBS everyday.”

UT Provost Steven Leslie cited Cronkite’s education at UT and later success as a signifier to future students that anything is possible.

“His work represents what this University stands for,” he said. “He shows us that what starts here changes the world.”