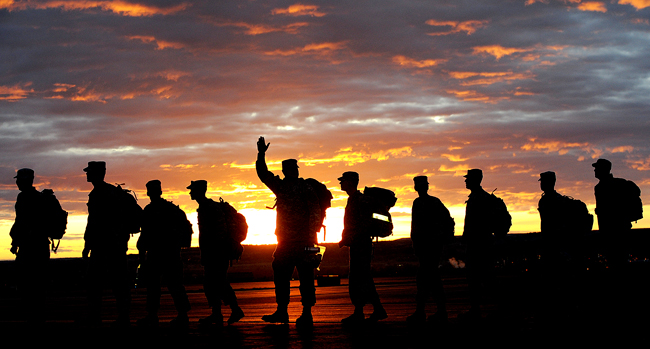 A soldier waves to his family as the Montana Army National Guard 484th MP Company departs from Edwards Jet Center in Billings, Mont. on Tuesday. The unit is headed to Afghanistan, where they may be one of the last companies to serve as troops, as opposed to military advisers over the next 10 years.

KABUL, Afghanistan — The U.S. and Afghanistan reached a deal Sunday on a long-delayed strategic partnership agreement that ensures Americans will provide military and financial support for at least a decade beyond 2014, the deadline for most foreign forces to withdraw.

The pact is key to the U.S. exit strategy in Afghanistan because it provides guidelines for any American forces who remain after the withdrawal deadline and for financial help to the impoverished country and its security forces.

For the Afghan government, it is a way to show its people that their U.S. allies are not just walking away.

“Our goal is an enduring partnership with Afghanistan that strengthens Afghan sovereignty, stability and prosperity and that contributes to our shared goal of defeating al-Qaida and its extremist affiliates,” said U.S. Embassy spokesman Gavin Sundwall. “We believe this agreement supports that goal.”

After 10 years of U.S.-led war, insurgents linked to the Taliban and al-Qaida remain a threat and as recently as a week ago, launched a large-scale attack on the capital Kabul and three other cities.

The draft agreement was worked out and initialed by Afghan National Security Adviser Rangin Dadfar Spanta and U.S. Ambassador Ryan Crocker. It must still be reviewed in both countries and signed afterward by the Afghan and American presidents.

U.S. forces have already started pulling out of Afghanistan, and the majority of combat troops are scheduled to depart by the end of 2014. But the U.S. is expected to maintain a large presence in the country for years after, including special forces, military trainers and government-assistance programs.

Neither Afghan nor U.S. officials would comment on the details of the agreement. A Western official said it outlines a strategic partnership for 10 years beyond 2014.

White House National Security Council spokesman Tommy Vietor said President Barack Obama expects to sign the document before a NATO summit next month. Many had started to worry that Karzai and Obama would miss that goal as talked dragged on and Karzai continued to announce new demands.

The final document is likely to be short on specifics. U.S. officials involved in the negotiations have said previously that the strategic partnership will provide a framework for future relations, but that details of how U.S. forces operate in the country will come in a later agreement.

The initialing ceremony means that the text of the document is now locked in. But the countries will have to go through their own internal review processes, Sundwall said.

“For the United States, that will mean interagency review, consultation with Congress as appropriate and final review by the president,” Sundwall said.

In Afghanistan, the agreement will have to be approved by parliament. The Afghan foreign minister will brief Afghan lawmakers about the document Monday, the Afghan president’s statement said.