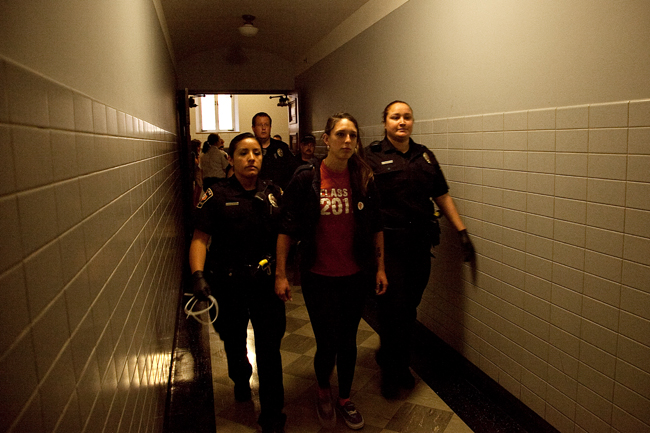 Geology senior Jessica Villareal is escorted out of the Tower by UTPD officers as 18 members of the Make UT Sweatshop-Free Coalition were arrested Wednesday afternoon.

Last week’s arrest of 18 activists connected to the Make UT Sweatshop-Free Coalition has inspired both disillusionment and support within the UT community.

Sabina Hinz-Foley, a Plan II junior and one of the students arrested, said the protest and the ensuing jail time generated wide support.

“We have hundreds of people contacting us and asking how they can get involved,” Hinz-Foley said.

Hinz-Foley said the group’s slogan, which is “make UT sweatshop-free,” does not communicate the complexity of their solution to prevent the abuse of workers producing UT apparel.

Ricardo Capuano, a government senior who studies social movements and was raised in Mexico, said the protesters’ message was lost in the buzz surrounding their arrest.

The activists need to engage the wider student body in their cause, Capuano said. Unless that happens, protests like the sit-in in President Powers’ office will fail to compel the UT community to act, he said.

“They need to mobilize the student body and get other students active in creating solutions to address grievances,” Capuano said. “I admit it is too early to tell whether their actions were successful.”

Thorne Webb Dreyer, who attended UT intermittently from 1963-68 and helped found a popular underground newspaper, The Rag, said the arrests were necessary to generate the level of media attention the activists received.

“They certainly got good publicity, and that coverage certainly would not have happened without the arrests,” Dreyer said.

The activists should be proud of both their stand for justice and the misdemeanor for criminal trespassing that now adorns their criminal records, Dreyer said. Yet, they should be humbled by the history of activists who risked much more during the Civil Rights Movement and protests against the Vietnam War, he said.

“[The criminal record] is a badge of honor,” Dreyer said. “It shows that you care about what is going on in the world. It’s a minor consequence compared to people I saw being bayoneted at the Pentagon.”

Now that students have demonstrated their commitment to a cause, the administration has a duty to address their concerns, he said.

“There are certainly times when an issue is important enough to put yourself on the line,” Dreyer said. “The administration has an obligation to respond to that commitment.”

Printed on Tuesday, April 24, 2012 as: Activist arrest motivate others to join in coalition