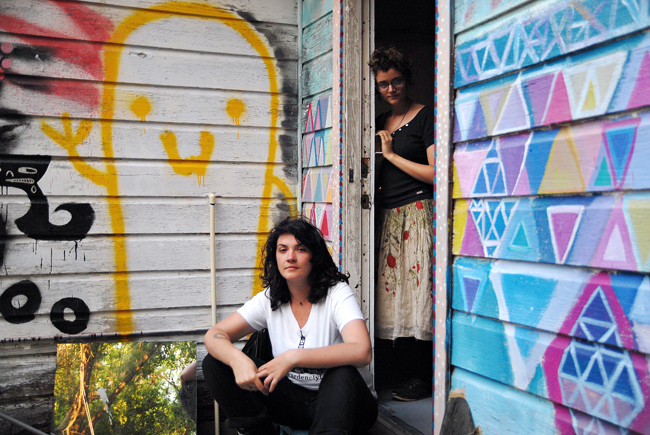 Olivia Pepper and Katie Rose Pipkin at the back door of Wardenclyffe Gallery. Pepper and Pipkin recently acquired the vacant building with the help of a Kickstarter initiative and enlisted the help of various volunteers to renovate it into an art gallery in East Austin.

When Katie Rose Pipkin and Olivia Pepper became roommates, they didn’t plan for their house to become a nexus for Austin artists; it developed organically. But that happenstance has proven formative, and inspired the duo to found the Wardenclyffe Gallery, an East Austin labor of love, through a distinctly grassroots initiative.

The roots of Pipkin and Pepper’s friendship mirrors that sort of spontaneity. Having accidentally encountered each other under the pedestrian bridge of Lady Bird Lake while simultaneously trying to locate a mutual friend, their ensuing artistic collaboration was catapulted by their shared space.

“I came here after living in the San Francisco Bay Area for several years,” Pepper said. “And they have a vital and flourishing art community, but it is very hard to break into, though that might just be my experience. There was almost a caginess towards outsiders. What I found in Austin was a welcoming and excited attitude and a desire to bridge gaps between media.”

Between the two of them, their strengths are varied. Pepper claims to have no ability to draw, but her penchant for organizing community engagement and considering environmental factors has drawn the more independently-oriented Pipkin into the communal fray. With projects such as Private Lives Puppet Theatre and the tongue-in-cheek religious-performative experience that is Church of Tesla, their partnership has worked its way into the public sphere.

Over the course of a couple years, the backyard of their house (affectionately dubbed “the island”) was transformed into a veritable gallery for installations, with numerous projects of various media shipped through the rooms of their home. It quickly became evident to both of them that they were outgrowing the scale of their domestic playground.

With the help of an online Kickstarter intitiative, Pipkin and Pepper gathered resources and support from amongst their already healthy body of artistic collaborators and friends. With 119 pledges and over $7000 (surpassing their $5555 goal) they closed the funding project in February and have since dedicated the funds to improvements on the gallery.

What was once “a ramshackle bungalow,” according to their Kickstarter webpage, has since been repaired and repainted, renovated with track lit fixtures, and now features a PA system that was put to good use during an expansive SXSW showcase.

Upcoming events at Wardenclyffe Gallery include a Candy Land-themed installation called “Dolce,” created by eleven year-old artist Hannah Mcelyea in collaboration with Pepper through a program called Little Artist/Big Artist. Also, an open call for submissions to a group show themed on “modern rituals” will continue through May 1.

Certainly, there is a precedent for projects such as Wardenclyffe, despite their seemingly unlikely ability to sprout up out of rocky soil. Without funding from government grants, corporate sponsorship or profit-based models, independent art initiatives have turned toward more novel ways of accruing resources, such as internet fundraising and the use of social networks.

“I feel like professionals in the industry are always five years away from doing what we are,” Pepper said.

In fact, the Wardenclyffe proprietors have looked to other artists for advice and inspiration in paving their own way.

“Poison Apple Initiative and Rubber Repertory [of Austin] are fantastic theater groups that have taught us a lot, worked with us at the island and will continue to be working in our space,” Pipkin said. “And Co-Lab has helped us.”

Co-Lab Projects, which hosts exhibitions for artists and operates out of central Austin, is particularly significant in relation to Wardenclyffe in that both organizations emphasize open requests for submissions.

While Co-Lab is funded in part by the City of Austin and has a longer history and established presence in the artistic community, the organization provides a sort of grown-up model for Pipkin and Pepper’s venture.

“We try to provide an open, accessible space for artists,” Sean Galauger, owner of Co-Lab said, “Lately, we’ve been focusing on educational goals.

We’re facilitating artists in their documentation of work.”

While Pipkin and Pepper continue to navigate the trials of starting up a gallery and performance space, the exterior walls of their building are a reminder of what it takes to raise a project from the ground up. Paintings from countless artists and volunteers swathe the countenance of Wardenclyffe as a testament to the DIY principles and inclusivity they strive for.

Printed on Tuesday, April 24, 2012 as: Roommates open up homes as hub, gallery for artist expression