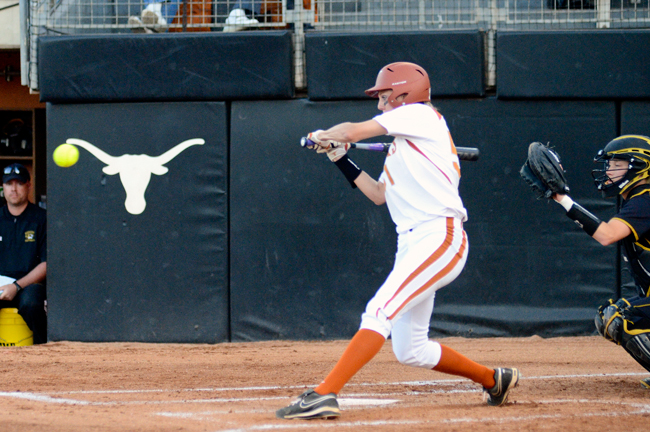 This weekend marks softball’s final installment of the State Farm Lone Star Showdown and for the century-old rivalry. The Longhorns will travel to College Station Friday afternoon to play the first game of the series on the road against the Aggies. Saturday, both teams will head over to Red and Charline McCombs field to play the rest of the series in Austin.

The highly anticipated game will be aired nationally on ESPN2. The No 5. Longhorns are ranked second in the Big 12 with a conference record of 11-5 and have a one-game advantage over the Aggies who have an 11-6 conference record.

The Aggies are ranked 14th in the country and are 31-14 on the season. They are led by junior Mel Dumezich, who was named Big 12 Pitcher of the Week last week.

During their last meeting, the Aggies won 5-1 against the Longhorns in College Station May 2011.

No matter if they are up, down or tied, the Longhorns have effectively fed off of each other, utilizing momentum at the plate. They have at least 10 innings so far this season in which they have scored at least five runs — a rare feat in softball.
“When one person on our team hits, the energy starts going. It’s a domino effect,” said senior Courtney Craig.

The most ideal inning for these momentum swings is the fifth inning — a time when the Longhorns have warmed up enough in the game but early enough to not put the game in jeopardy. They have scored 55 runs in the fifth inning alone so far this season — most of them as part of comebacks.

“Teams have been scoring before us, and we’ve stayed calm. We don’t let it get to us,” said junior Torie Schmidt.

The most recent momentum surge came in a 13-6 win in Lawrence, Kan. where the Longhorns utilized a seven-run inning to secure the win against the Jayhawks.

Seniors Lexy Bennett, Nadia Taylor and Craig, who were appointed as team captains earlier this year, have proven themselves to be invaluable to the Longhorns’ success this year.

Bennett, who recently was drafted third overall in the National Fast Pitch Pro Draft, has become a Top 25 finalist for National Player of the Year for the Amateur Softball Association. Her .408 batting average and 49 RBIs lead the potent Texas offense and she has 51 hits and 38 runs so far this season. In February, the second baseman was named Player of the Week for the Big 12 Conference for the third time in her career. Bennett is ninth in the country for RBIs and owns the career RBI record at Texas with 147. She also has the highest career batting average at Texas with .379.

As a third baseman, Taylor, along with Bennett, has been an important component in the infield and at the plate for Texas. Taylor has started all but three games in four years at Texas, most of them at third base, although she has contributed as designated player for the Longhorns. Twice this season Taylor has been named Big 12 Player of the week, most recently last week for her performances against Texas Tech and Kansas where she went .800 at the plate.

Despite struggling with injuries last year, designated player Courtney Craig hasn’t let anything stop her this season. Her .352 career batting average ranks third in the Texas record books and she is second on the team this season with 35 RBIs and third with 43 hits. As a freshman in 2009, Craig also dabbled in the circle and pitched 4 and 2/3 innings for the Longhorns, earning a 3.00 ERA.

“These three have earned the trust of their teammates, they’ve walked the walk and they have the ear of their team,” said Texas head coach Connie Clark.

Printed on Tuesday, April 24, 2012 as:Horns set to square off against rival Aggies