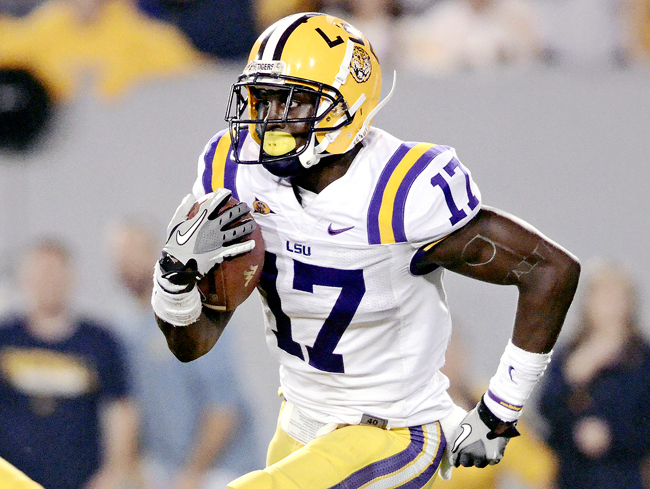 LSUs Morris Claiborne is projected by many to go within the Drafts first few picks. Claiborne impressed at the combine and saw his stock climb.

The Colts have removed the large banner featuring Peyton Manning outside of Lucas Oil Stadium. Andrew Luck is coming to town.

This draft has had more drama leading up to it than others. The seemingly never-ending Manning, Tim Tebow and Luck saga will finally come to an end, and Luck will be heading to Indianapolis.

Although Heisman winner Robert Griffin III is a standout quarterback, he will be chosen second and going to Washington. This will be the fourth time since 1967 that a pair of quarterbacks will go No. 1 and No. 2 in the draft. With the first two picks virtually set in stone, the ones following are where it gets more unclear.

Trent Richardson could shake things up

There is no doubt that Trent Richardson is one of the best players in the draft. The 5-foot-11 speedster has the ability to break tackles, catch the ball and run (he ran the 40-yard dash in 4.5 seconds).

But how long it will take for his name to be called on draft day is unclear. Running backs are often underappreciated and teams will likely be torn as to whether or not he deserves to be a top-10 pick.

He was vital in Alabama’s national championship season. But in a pass-heavy NFL, teams that will be calling names early may be hesitant to choose Richardson.

Although it is unclear where Richardson will go, the Browns are in need of a solid running back. Richardson could be that guy.

But it would be hard to use the No. 4 pick on a running back.

Some surprises could break into the first round

LSU wide receiver Rueben Randle had 53 catches for 917 yards and eight touchdowns during LSU’s impressive run to the BCS National Championship. He had a breakout season and was named to the All SEC-First Team. He only caught 44 passes in his first two years as a Tiger, but this year he proved he is NFL-ready, even potentially deserving to be a first rounder.

Like Randle, Notre Dame’s Harrison Smith had a strong year that will put him in contention to be a first round pick. This season he had 93 tackles, seven interceptions and seven pass break ups. He could be a strong fit for the defending Super Bowl Champion Giants or the Patriots, who are in need of some improvement on the defensive end. Smith has snuck up and is the second best safety in this year’s draft behind Alabama’s Mark Barron.

No surprise here; the SEC will dominate first round

With the SEC winning the last six national championships, it’s no surprise that players from the conference will be hearing their names called very frequently today. Between nine and 12 players will likely be picked from the conference in the first round.

Alabama’s Richardson and LSU cornerback Morris Claiborne will likely be the first two chosen from the competitive conference. Barron will be chosen in the first round, even though safeties aren’t typically chosen so early. South Carolina’s Stephon Gilmore and Melvin Ingram will probably be top 20 picks.

Printed on Thursday, April 26, 2012 as: SEC expected to represent, dominate first round picks