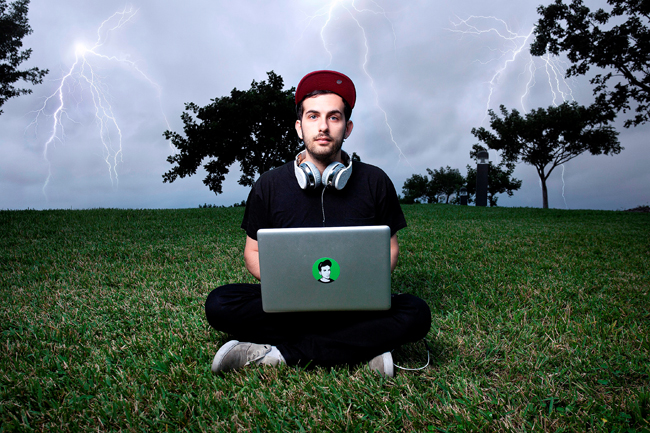 Dubstep producer Borgore, known for his aggressive sound and explicit lyrical content, will perform at this years Nocturnal Wonderland this Friday (Photo by Josiah Van Dien).

Dubstep artist Borgore is filthy, but in a good way. With his combination of heavy, head-throbbing bass and explicit lyrical content that would even leave controversial hip-hop group 2 Live Crew squirming, Asaf Borger is all about having a good time in the raunchiest way possible. Originally a drummer for Israeli death metal band Shabira, Borgore has since taken his heavy beats to the electronic world, befriending peers Skrillex, 12th Planet and Bassnectar.

Borgore spoke with The Daily Texan about performing, similarities between metal and dubstep and his show at Nocturnal Wonderland this weekend in Rockdale, Texas.

The Daily Texan: You recently performed at this year’s Coachella. How was the experience? Any memorable moments?

Borgore: Coachella was amazing. They did not let me use my pole dancers during my performances, but it was still a great experience. The second weekend was much more enjoyable for me. I was warming up and getting used to the Coachella vibe the first weekend.

DT: Your music is a combination of dubstep and the kind of explicit lyrical content you would expect to hear from a hip-hop song. What led you in that direction?

Borgore: I’m influenced by groups that have been known to bring together heavy musical arrangements with certain aspects of hip-hop. Bands like Korn, Limp Bizkit — those kinds of groups influence the sound I’m going for.

DT: You’ve mentioned before in other interviews that many dubstep artists have a background in metal and heavy rock music. Would you say that this is because both dubstep and heavier rock genres share that same type of aggressive sound?

Borgore: Definitely. In both genres you have a very in-your-face and abrasive sound. That’s why, at least for me, the transition from a metal drummer to a dubstep producer was not that difficult. I still felt right at home.

DT: You originally debuted as a dubstep artist with your 2009 release, Gorestep: Vol. 1, and now you recently released your Flex EP. How do you feel you’ve improved as a performer since your start?

Borgore: I feel that I have improved greatly since then. One thing I’m trying to do with my performances now is incorporating real instruments into my live performances. I have some great ideas in mind for this big show I am having in September, and it’s going to be insane. I can’t really say much because I don’t want anybody to steal my ideas, but trust me, it’s going to be insane.

DT: You will be a part of this year’s Nocturnal Wonderland. Is this your first time doing the music festival?

Borgore: Yes. Prior to [Nocturnal Wonderland], I performed in Austin for South By Southwest. I really enjoy performing in Texas. The people are friendly, the crowds are always wild — it’s always a good time.

DT: Are there any future collaborations you plan on doing before the end of the year?

Borgore: For my next album I’m working with a bunch of great and interesting people. I do not want to give anything away, but I will say that the collaborations are amazing. Some of them are dream collaborations, and the others are just cool. Slowly but surely, I’m just achieving my goals.