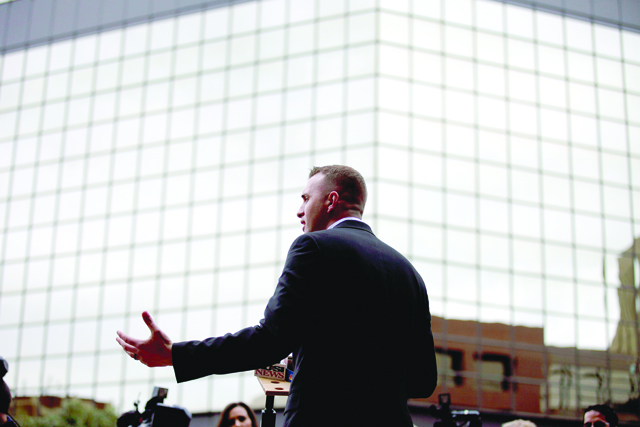 Marine Sgt. Gary Stein speaks with reporters in front of the federal court building Friday, April 13, 2012, in San Diego. U.S. District Judge Marilyn Huff on Friday, April 13, 2012 denied a request to block discharge proceedings of Stein, who faces being kicked out of the military and loss of benefits for criticizing President Barack Obama on Facebook.

SAN DIEGO — A sergeant will be discharged for criticizing President Barack Obama on Facebook in a case that called into question the Pentagon’s policies about social media and its limits on the speech of active duty military personnel, the Marine Corps said Wednesday.

Sgt. Gary Stein will get an other-than-honorable discharge and lose most of his benefits for violating the policies, the Corps said.

The San Diego-area Marine who has served nine years in the Corps said he was disappointed, and argued that he was exercising his constitutional rights to free speech.
“I love the Marine Corps, I love my job. I wish it wouldn’t have gone this way. I’m having a hard time seeing how 15 words on Facebook could have ruined my nine-year career,” he told The Associated Press.

Gary Kreep, an attorney for Stein, said he would pursue administrative appeals within the Marine Corps but anticipates the effort will fail. He said he planned to file an amended complaint in federal court.

“As long as he wants to pursue this, we will be supporting him,” said Kreep, who is executive director of the United States Justice Foundation, an advocacy group.
The Marines acted after saying Stein stated March 1 on a Facebook page used by Marine meteorologists, “Screw Obama and I will not follow all orders from him.” Stein later clarified, saying he would not follow unlawful orders.
Brig. Gen. Daniel Yoo, the commanding general of the Marine Corps Recruit Depot San Diego, said Wednesday that evidence supported a recommendation to
discharge Stein.

Tom Umberg, a former Army colonel and military prosecutor, believes the decision to discharge Stein will have limited impact because the vast majority of Marines would never consider such postings.