Point-Counterpoint: The push for a sweatshop-free UT 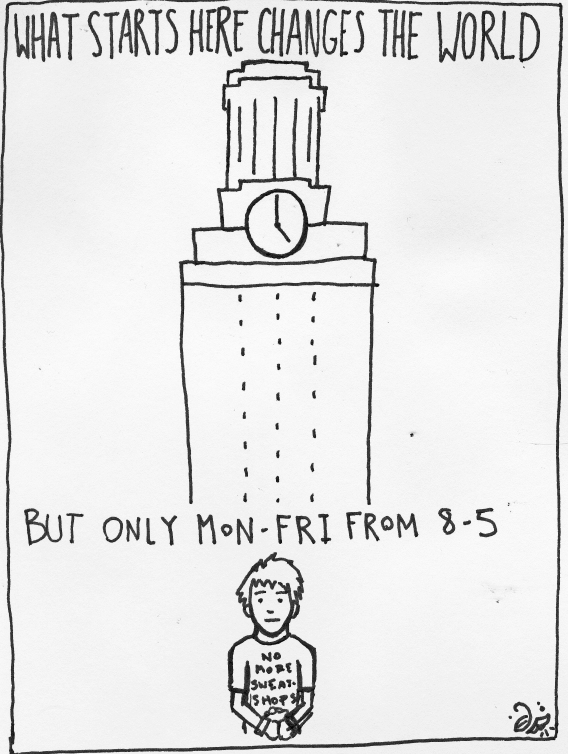 Editor’s note: Last week, 18 members of the Make UT Sweatshop-Free Coalition protested the University’s affiliation with the Fair Labor Association, a group that monitors working conditions. The protesters demanded that the University switch membership to the Worker Rights Consortium. After protesting outside of President William Powers Jr.’s office in the Main Building for hours, they were arrested for trespassing by UT Police Department.

Point: Putting the demands into perspective

Last week, 18 members of the Make UT Sweatshop-Free Coalition occupied President William Powers Jr.’s office for approximately five hours before being arrested by UTPD. The group voiced its demands that UT join the Worker Rights Consortium, an independent labor standards monitoring organization, and produce all trademarked apparel according to its regulations.

The protest itself was rather lackluster. Throughout the afternoon, officials warned the small group of activists about the danger of arrest and trespassing charges and gave the students ample opportunity to leave voluntarily. There were a few shining moments of melodrama — a student read aloud Martin Luther King, Jr.’s “Letter from Birmingham Jail” and the protesters formed a hand-holding circle of solidarity in the minutes before their arrests — but the protest’s only discernible victory has been an opening up of campus dialogue about sweatshops and labor standards.

UT spokesman Gary Susswein stated that because of budgetary constraints, UT will not partner with the Worker Rights Consortium, but students and faculty alike are engaging in a debate that has raged for years within the economic development and human rights communities.

In 2009, Nicholas Kristof, author and New York Times columnist, set off a firestorm of controversy when he published a column defending sweatshops in developing countries. He advocates an expansion of manufacturing industries in Asia, Africa and Latin America, claiming, “Bad as sweatshops are, the alternatives are worse.” Sweatshops, according to Kristof, offer the poorest families “an escalator out of poverty,” while stipulating fair labor standards in trade agreements stifles trade, raises prices for consumers and drives companies away from poor countries.

Needless to say, Kristof’s pro-sweatshop stance was not well received by the left; to a self-proclaimed idealist, the notion that sweatshops should remain unchallenged simply because the alternatives are even more appalling does indeed sound abominable. However, even liberals must acknowledge some of the hard truths that Kristof presents, and we must also recognize the benign misguidance of the UT protesters’ intractable demands.

Objectively, sweatshop labor does provide a better-paying and safer environment than, say, scavenging through a dump or driving a rickshaw. Imposing immediate sanctions on substandard factories would only drive corporations into less labor-intensive industries or countries without strict regulations. The newly jobless workers might be freed from oppressive sweatshop conditions, but they would not be freed from the financial demands of daily life and would end up in even direr circumstances.

Vehement opponents of sweatshops also forget our own country’s history with unscrupulous labor practices. Millions of Eastern European and Asian immigrants worked in backbreaking conditions in the decades surrounding the turn of the century, and illegal immigrants are still exploited in low-wage, high-risk industries. Of course, “if it happens in America it’s OK” is not an acceptable justification for oppression and exploitation in developing countries; however, there are much more realistic steps toward labor rights that students can take closer to home. An impassioned battle for international human rights is, of course, much more glamorous than domestic advocacy, but activists should not neglect either.

UT should encourage the Co-op to produce at least a portion of its merchandise through manufacturers that guarantee fair labor practices, and it should further investigate allegations of corruption within its current labor rights partner, the Fair Labor Association. The $50,000 membership fee charged by the Worker Rights Consortium would make a negligible impact on the University’s budget, and by many accounts the WRC holds its member companies to much higher standards than the Fair Labor Association.

However, an immediate and radical shift toward sweatshop-free UT merchandise would only drive up prices and leave struggling factory workers jobless or marginally employed. Ardent students must mix a hefty dose of realism with their lofty goals in order to responsibly address labor rights issues.

Oliver is an English and sociology freshman.

Last week, a University student organization made major waves on campus when 18 of its members were arrested. The Make UT Sweatshop-Free coalition, the UT branch of United Students Against Sweatshops, hosted a campus-wide human rights event that led to students occupying President William Powers Jr.’s office in the UT Tower. The event promoted workers’ rights and brought to light flagrant human rights violations committed by factories that produce UT apparel.

These students were demanding Powers encourage the University to affiliate with the Worker Rights Consortium, a nonprofit labor rights monitoring corporation that conducts investigations of working conditions in overseas factories. Currently, UT is a member of the Fair Labor Association, a group accused of misrepresenting labor abuses.

The movement has the support of dozens of University and city organizations as well as numerous UT professors from a variety of academic departments. However, the movement has garnered criticism as well from opponents who misunderstand the UT student organization’s mission statement.

An argument made famous by New York Times columnist Nicholas Kristof states that “the denunciations of sweatshops end up taking jobs away from the poorest countries” and eliminates the manufacturing industry in these countries.

This obvious argument fails to correctly criticize the Make UT Sweatshop-Free coalition. This organization is not calling for the end of sweatshops. Shiyam Galyon, biology senior and USAS member, argues, “While our name is ‘Students Against Sweatshops,’ what we are asking for is a more transparent and legitimate monitoring organization.” This is where affiliation with the WRC comes into play.

The demands of these protesters are far from the radicalism many critics attribute to them. In fact, as many as 180 other American colleges and universities have already affiliated with the WRC, making UT the radical outlier in this situation. As influential public schools — including all 10 of the University of California institutions, University of Michigan and University of Houston — have joined the WRC, clearly this watchdog group does not pose a credible threat to the textile industries in these developing countries. The industries can comply with these parameters for improved conditions and still operate, ensuring jobs will still be available in communities.

Furthermore, the U.S. Department of Justice Antitrust Division has given its approval of the WRC after researching the WRC’s methods and whether it produces anticompetitive effects. The department finds that the WRC’s proposals are “unlikely to lessen competition in the collegiate apparel sector. Moreover, the factories affected by the proposed licensing terms are likely to constitute only a tiny portion of the labor market, making significant anticompetitive effects in that market unlikely.” As the Department of Justice finds no reason to challenge the WRC’s initiatives, we find there are numerous reasons affiliating with the WRC would detriment neither the University nor textile industries abroad.

Some critics urge these student activists to focus on domestic rights violations as opposed to international rights violations. This obtuse and America-centric viewpoint not only detracts from the student activists who do champion domestic human rights issues but also fails to understand the impact UT has worldwide. As Galyon aptly frames it, “Our world is globalizing and we need to acknowledge the link between local and global. At UT, that link is through our collegiate apparel. We are in a position to act local and affect global. To say that we shouldn’t care how our local policies are affecting others far away is to promote apathy.”

We can no longer hide behind our UT hoodies and ignore the human rights violations of those producing them. As a flagship university and a historical trendsetter, UT has the responsibility to make tangible change by affiliating with the WRC, thereby promoting improved workers’ conditions in factories we have a direct influence in.

Waliany is a Plan II and government senior.