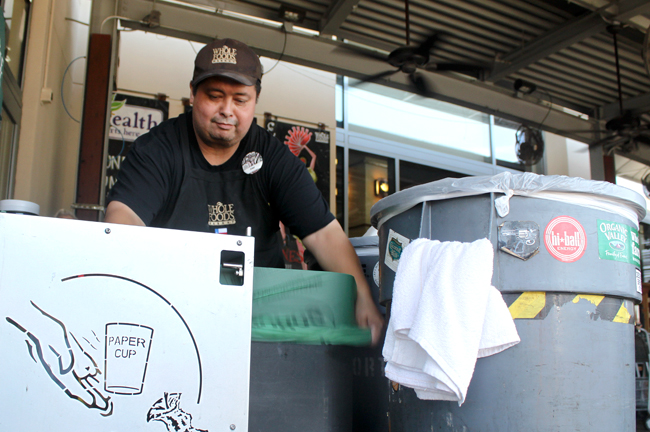 Whole Foods employee Ronny Gaitan empties out a recycling bin in order to maintain a going green friendly environment Wednesday afternoon. Businesses on Sixth Street are expected to receive new trash bins where they will accept more recyclable materials with one trash bin instead of having several slots for the different types of items.

The city has started a new program for downtown businesses that simplifies recycling with hopes of decreasing waste.

“Austin Resource Recovery service area includes about 400 businesses,” Hammond said. “The downtown entertainment area, like Sixth Street and Congress Avenue will be affected a lot. All of those businesses will receive the new dumpsters, and we hope the number grows as other businesses see the convenience of the dumpsters at no extra cost.”

She said the businesses affected by the new program recycled 750,000 pounds of glass and paper and cardboard in 2011, and they are expected to recycle more this year because of the new dumpsters.

“We don’t know yet how much more recycling will occur due to the new system, but we will be monitoring it to get that data,” Hammond said. “We certainly hope and expect that even more will be recycled downtown.”

Because UT is outside of the downtown area and recycles under a state program rather than the city, it will continue to recycle in separate bins, said Karen Blaney, assistant manager for UT’s Office of Sustainability.

“At the present time, UT-Austin will continue to separate paper from other recyclable materials, as the clean paper stream is an important revenue source for continuing the recycling program,” Blaney said.

Blaney said UT currently recycles about 66,400 pounds of can, bottle and paper/cardboard recyclables per week using separate bins for each, although she said it is difficult to calculate an exact number because so much recycling is occurring all over campus.

Undeclared freshman Melissa Ruiz said she would not recycle at all if not for the recycling bins conveniently located around campus.

“I just see those bins everywhere,” she said. “Even if I’m rushing to class I can stop and put my plastic bottle in a plastic recycle bin without even thinking about it. I guess almost everyone on campus recycles without even realizing it’s because of those bins.”

Blaney said the athletics program diverted an additional 29 tons of plastic, glass and aluminum during the 2011 football season alone, and the Division of Housing and Food Service has recycled 186 tons of food waste this school year. She said UT also recycles through its furniture shop, which rehabilitates old furniture and recycles unused construction materials. The numbers from these programs increase the diversion rate, Blaney said.