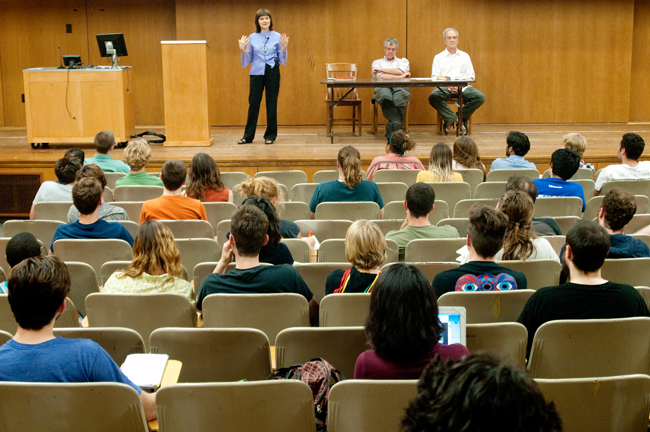 Professor Kathleen Higgins addresses a crowd on Chinese ethics at a panel discussion on non-Western perspectives on ethics Wednesday night. The other two speakers were professor Daniel Bonevac who spoke on African schools of thought and professor Stephan Phillips who lectured on ethics of South Asian philosophy.

UT’s Undergraduate Philosophy Association took philosophy out of Waggener Hall and beyond the scope of western thought Wednesday night.

The student group brought philosophy department faculty members and about 60 students together for a discussion on the subject of non-western perspectives on ethics. Philosophy professor Kathleen Higgins spoke on Chinese ethics, professor Stephen Phillips lectured on the ethics of South Asian philosophy and professor Daniel Bonevac described the ethics of various African schools of thought.

Higgins said three Chinese traditions of philosophy — Confucianism, Daoism and Buddhism — are united by the significance of harmony.

“All of these traditions see the importance of harmony,” Higgins said. “For Confucius, it’s social harmony. Daoist harmony is harmony with nature, which includes human nature. In Buddhist thought, harmony is the sense of being part of this larger whole and not trying to do anything that ignores that fact.”

Phillips said he could not possibly hope to cover the diversity of thought in South Asian philosophy, so he decided to analyze two seemingly contradictory ethical perspectives found in the Bhagavad Gita, a major Hindu text.

“The Gita opens with an ethical dilemma,” Phillips said. “There are two ethical theories at work. The first I will call conventionalism. The second I will call the idea observer.”

Phillips said the Gita advises one to uphold duty and tradition in the Hindu god Krishna’s insistence that the warrior Arjuna do battle with his family because convention obligates warriors to fight. On the other hand, Phillips said Krishna’s ultimate insistence that Arjuna decide whether to fight points to an ethical theory built around a yogic clarity of perception.

“By taking an impersonal attitude where you see high caste and low caste people as the same, yoga will make you capable of making your own judgements,” Phillips said. “Through the very end you have these refrains of Krishna telling Arjuna to go out and fight, but ultimately Arjuna is capable of a kind of ethical intuition.”

Bonevac said African philosophy is the product of severe discontinuity and in that way differs from the more continuous traditions of China and South Asia.

“Due to historical reasons there were a lot of invasions that disrupted conditions in Africa,” Bonevac said. “It’s a difficult place to generalize about. There isn’t the kind of continuity there is in other places. There was no continuous written tradition.”

Bonevac said he chose to focus on depth rather than breadth in his talk on African ethics. He said the ethics of West Africa — which emphasize the moral dignity of all humans — paralleled those of the German philosopher Immanuel Kant. The ethics of East Africa judged actions by their effect on the wellbeing of society, he said. Ethiopian philosopher Zera Yacob reasoned that if man was essentially good, then his human tendencies must be essentially good, Bonevac said.

Africa’s scarcity of resources weighed heavily in many of the continent’s schools of ethics, Bonevac said.

“Moral conflict is a theme in much of African thought due to limited resources,” he said. “Limited resources are much more front-and-center in African ethics than in European philosophy. When Aristotle asked who is a good man, his answer was a man who behaves like a rich Athenian and spends magnificently.”