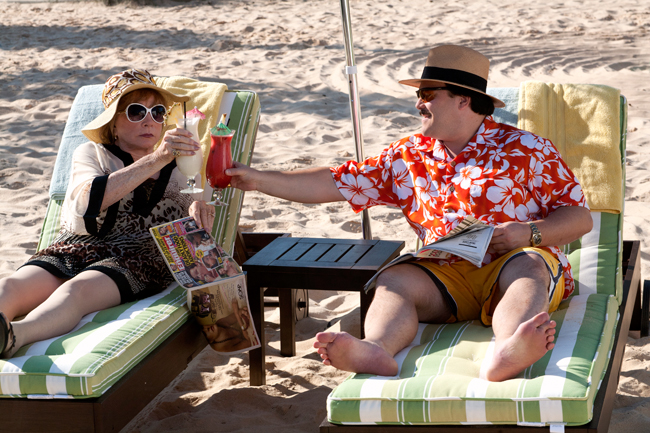 When one looks back on the work of Jack Black, there’s a tendency for Black to come across as irritating. After all, his work is often one-note, loud and abrasive, and even when Black manages to tame his act into something recognizably human, it can still get stale quickly. However, “Bernie” represents something entirely different for Black, his first portrayal of a real-life figure, and it makes for the best performance of his career.

Inspired by an article in Texas Monthly, “Bernie” tells the story of Carthage, Texas’ most beloved resident, Bernie Tiede (Jack Black). Bernie has a habit of befriending local widows, but his relationship with the notoriously acidic Marjorie Nugent (Shirley MacLaine) becomes something much more parasitic and needy than simple friendship, until Bernie finally snaps under the weight of Nugent’s demands and murders her. It’s here that District Attorney Danny Buck Davidson (Matthew McConaughey) gets involved, determined to convict Bernie for a crime that all of Carthage refuses to admit he committed.

“Bernie” director Richard Linklater has worked in almost every genre at this point in his eclectic career, but “Bernie” is one of his finest films, an unapologetically black-hearted examination of what drives a gentle man like Bernie to murder. The film moves at a quick, easy pace, but what makes it stand out is how Linklater completely understands how small-town Texas really works — the social ebbs and flows, the barrage of colloquialisms and the deeply entrenched beliefs about how things should be. It’s the authenticity of the small details that gives “Bernie” its unique sense of humor. Linklater layers in interviews with Carthage residents, portrayed flawlessly by the actors of the film.

With the titular role, Jack Black has a very hard line to walk, keeping his character sympathetic without neglecting to acknowledge the gravity of his mistakes. Black’s performance lacks his usual abrasive nature, and he portrays Bernie with a gentle charisma and hilarious falsetto voice that makes it very clear why the entire town of Carthage is drawn to him. It’s a strong, unusual performance from Black, especially as Bernie is ravaged by the anguish stemming from his crime.

Matthew McConaughey leads a strong supporting cast with his playful, bewildered performance, and Shirley MacLaine is wonderful as the stubborn, crotchety Mrs. Nugent.

At this point, Richard Linklater could make just about any film he wanted, and it would probably be entertaining. His strength for capturing an infectious, nostalgic sense of time and place is undeniable, and his actors are never wasted or underused. “Bernie” is a film that showcases Linklater at his best and a truly hilarious slice of Texas life, one that every native Texan will undoubtedly enjoy.