Freshman Strauss has battled back to lead Texas into the postseason 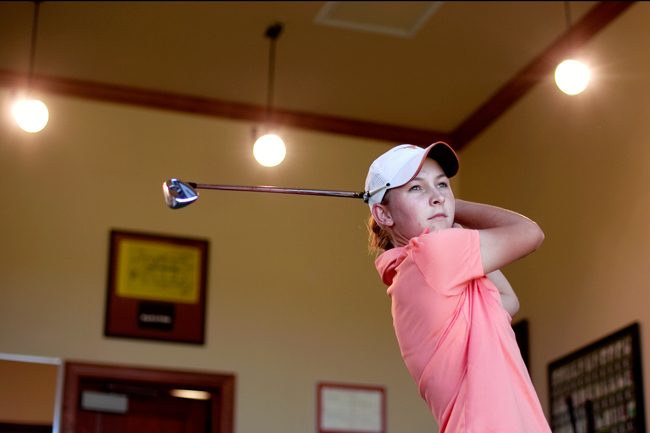 Freshman Bertine Strauss has solidified the Longhorn lineup this season giving the team a solid option in th five slot with her 76 scoring average.

After a year of change, struggles, successes and adjustments to a new country, freshman Bertine Strauss is peaking at the right time and will be a huge part of any success Texas has this postseason.

In the fall, Texas was off to a tremendous start, winning the first tournament of the year in Texas A&M’s backyard, where Strauss joined three teammates to finish in the top 11 individually. Texas earned the program’s first No. 1 national ranking, and it appeared to be the beginning of a historic season. Strauss joining an experienced squad of upperclassmen gave the team the right lineup to compete all year.

By the third tournament, however, Strauss knew something was wrong. She withdrew from the tournament after the first round due to illness, but somehow miraculously came back for Sunday’s final round to help the team score. Despite her courageous effort, the team finished a disappointing 10th, and Strauss’ illness wasn’t just an everyday cold or an adjustment to weather. She had pneumonia.

After missing the final tournament of the fall, Strauss went home to South Africa to recover and get back to golf. It was obvious that her presence was missed on and off the field.

“She’s hilarious and a little spark for our team,” said senior Nicole Vandermade. “When she was out, it was sad because we missed having her around to make us laugh.”

Her time away from the course made her hungrier for success in the spring season.

“I ended up missing five weeks, but when I look back at it now, it was probably a good thing because it made me want to come back and play well,” Strauss said. “Missing the last event of the fall, I was definitely frustrated. It made me think a lot about why I play golf and enjoy it so much, and it definitely made me more hungry to come out and play this spring.”

Once the trainers cleared her to play, Strauss was back on the course to practice for the competitive spring ahead.

“Golf is like a riding a bike, and it doesn’t go away,” Strauss said. “When I’ve been playing so long, I can just get back on and ride, so it wasn’t that bad to get back into [golf]. While I was home, I had one round where I shot 5-under-[par]. That was the point when I realized, I’m definitely back.”

Coming back for the spring, expectations were high for the Longhorns, who had climbed into the top 10 nationally and were the defending Big 12 champions. But when the spring slate began, Strauss and the rest of the Longhorns struggled.

At the UCF Challenge, Strauss had her worst tournament of the year, coming in 76th out of 99 golfers.

“In the beginning I put quite a lot of pressure on myself,” Strauss said.

Slowly, Strauss has improved in every tournament this spring, jumping to 49th, to 35th, to 26th, and just last week she led Texas and finished second overall in an exhibition round with national powerhouse Vanderbilt.

“I’ve just had a lot of fun the last few events and I’ve managed to shoot a few more lower rounds,” Strauss said.

“She has really bounced back and is stronger,” said head coach Martha Richards. “She is hitting the ball great and starting to feel comfortable in Texas, knowing she has a family here, too. When you go halfway around the world like she has, it takes awhile to get settled.”

Strauss has definitely settled into her new life, enjoying her golf game, her teammates and her new home as a Longhorn.

“The one thing that stands out to me [about the United States] is I never knew how big college sports are,” Strauss said. “You hear about it from being in a different country, but you don’t realize that there are 100,000 people that come to see a football game. To be in the stadium and to see all of the pride and tradition of what it means to be a Longhorn was an amazing experience. I’m really excited about next season.”

At the PING/ASU Invitational, Strauss fired a 69 in the second round for her best round of her collegiate career, placing herself in 4th among the nations’ best golfers. In the final round, however, Strauss wasn’t able to close the deal, and dropped to 26th.

“Sometimes the first time around, when you’re in the thick of things, you step up and win the tournament, and other times you fall down and skin your knees a little bit,” Richards said. “What I love is the way she has learned from that.”

In a season full of ups, downs and learning experiences for Strauss and the Longhorns, they are saving their best for last.

“It was unfortunate to see her get sick so much last year, but I think it was a learning process where she was able to learn more about college life and college golf, and now she’s come back and used those experiences to her advantage,” Vandermade said.

This weekend in Lawrence, Kan., Strauss will be the only underclassmen competing in the Big 12 Championship, as the No. 31 Longhorns try to defend their title.

“We haven’t played our best golf yet,” Strauss said. “I’m still waiting for that one really low round, and I’m pretty sure it’s going to come in the very near future.”

Printed on Friday, April 27, 2012 as: Pneumonia set her back but freshman is back strong